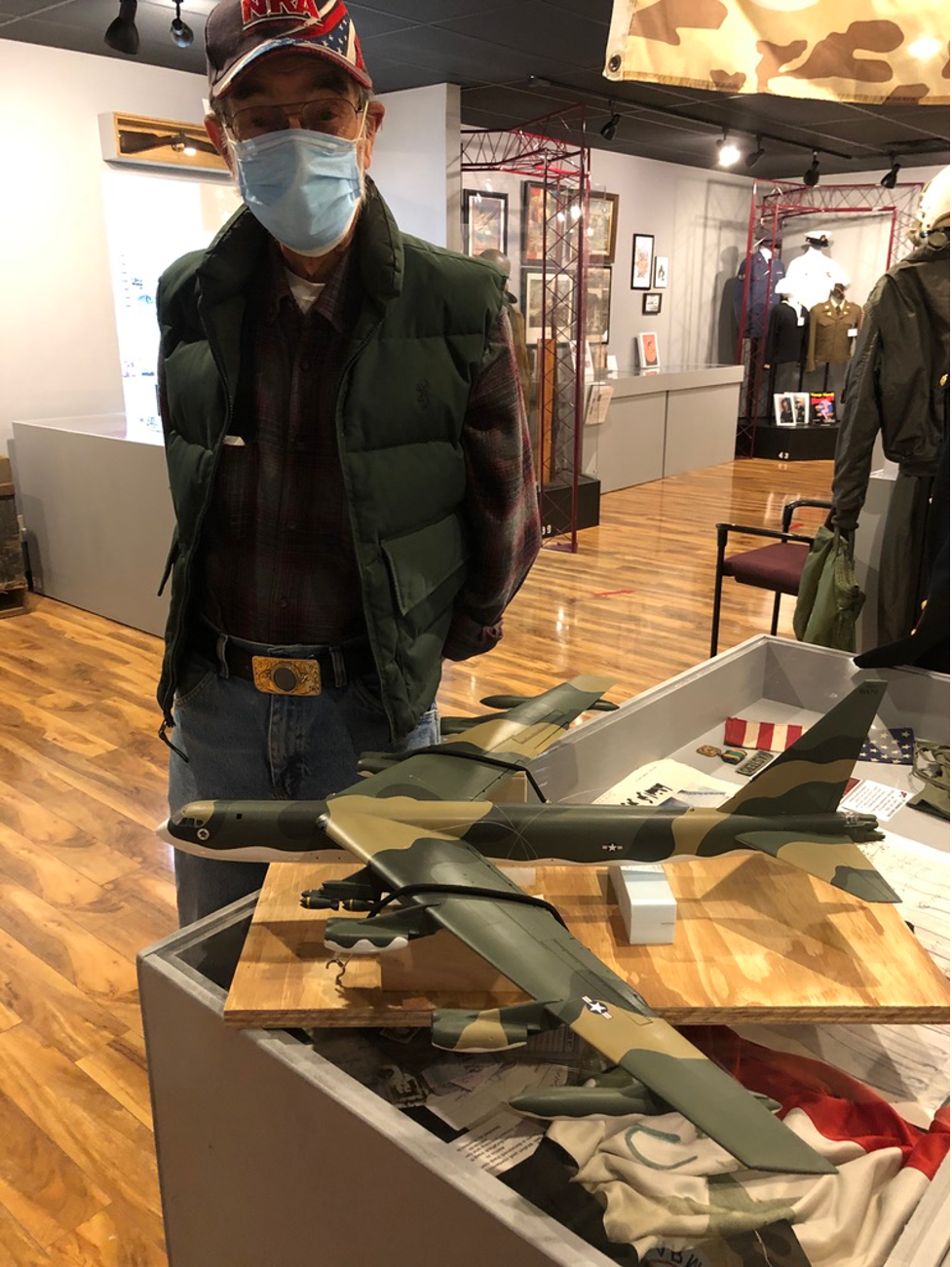 A recent addition to the St. Charles County Veterans Museum is this B-52 model refitted by Tom Smith (Arkansas Air National Guard 1956-1963). Tom started making models at age 8.  He has fashioned by hand authentic replicas of numerous planes from WWI to present day.  Tom has countless planes on exhibit at the museum.

The B-52 has been in service with the USAF since 1955. The B-52 was nicknamed BUFF (Big Ugly Fat F_ _ _ _ _ or Fella).  Our display model, recently restored by Tom Smith, honors the service of Air Force flight and ground crews who served with the B-52. The plane is in our Vietnam area of Gallery 2.

Two Air Force pilots who flew the B-52 have stories preserved in the St. Charles County Veterans Museum.  Both pilots participated in Operation Linebacker II.  Operation Linebacker II would begin on 18-DEC 1972. The initial orders called for three days of intense bombing effort, with a strong prospect of continued bombing.

Both came home, but only one survived…

The 18th of December when we get to the target, it was an undercast (clouds below the planes) night.  We get a SAM launch (Surface to Air missile). They were radar guided and one of the biggest threats we faced up there.  We did have some electronic counter measures on the airplane.  You could see a SAM launch with a flash of orange flame under the cloud layer and as the missile broke through the clouds, you could see the trail and we would move the B52 – we called it “jinking” (sudden, rapid change in the aircraft’s flight path).  We would move it a bit and if the missile held still on your windshield you knew he had you locked on.  So as soon as the missile started veering up from the windshield you could ignore him and move on, he had lost your radar contact.

I counted 26 SAM missiles from the time we got on the initial bomb run for the target that first night till we actually dropped our bombs.  A B52 had a crew of six.  We have two pilots, a navigator, a radar navigator who was essentially the bombardier, we had an electronic warfare officer and a gunner.  The B52 had four .50 caliber guns in the tail so it’s lethal from the back.  The bombardier or what we call the radar navigator would get us to the target, find the target, drop the bombs.  After dropping the bombs, we completed a massive, very steep turn back to Thailand and back home to Guam.  It was an 18-hour mission on that particular night.  We lost 16 airplanes in that 11 days.  To lose that many airplanes was a tragic loss.

Another B52D was flown by Capt. Robert J. Morris Jr. Morris was shot down near Hanoi on 26-DEC 1972.  The B-52 was struck by as many as three North Vietnamese surface-to-air missiles.  Morris gave the bail-out order and the crew of the aircraft parachuted to safety.  Four crew members were captured by the North Vietnamese almost immediately.  Morris was reported missing.

For almost 5 years, the family of Captain Morris awaited news of his fate.  Ultimately, the captured crew members were released in Operation Homecoming on 12-FEB 1973.  Captain Robert Morris Jr. was declared dead on 26-DEC 1972.  In late September 1977, the Vietnamese discovered the remains of Morris and he was repatriated. Robert is buried in Jefferson Barracks National Cemetery in St. Louis, Missouri.

Robert was the only pilot killed in action from Missouri during Vietnam.  During the month of December 1972, 62 crewmembers of B52 aircraft were shot down and captured or went missing. Of these 62, 33 men were released in 1973. The others remained missing at the end of the war. Over half of these survived to eject safely.

These strategic bombing strikes damaged the war-fighting capability of the North Vietnamese and convinced them to return to the negotiating table. As soon as Hanoi signaled it wished to resume peace negotiations, Linebacker II raids immediately ceased on 27-JAN 1973.  As a result of this campaign, the North Vietnamese came to terms quickly, U.S. prisoners of war were returned, and the U.S. was subsequently able to pull out of South Vietnam.