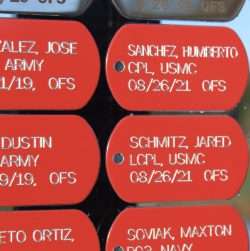 A Powerful Memorial is Coming to the St. Charles County Veterans Museum!

The Veterans and Athletes United will bring the Memorial Honoring Fallen Heroes of the War on Terror from across the United States to the St. Charles County Veterans Museum on August 25 and will remain  on display through August 29.

The Fallen Heroes Memorial features a 28-foot American flag composed of the dog tags of over 7,000 fallen heroes, with 50 gold stars in honor of the family members of fallen soldiers who died while serving in the War on Terror from 2001 to the present.

The outdoor exhibit and the museum will be OPEN 24 HOURS A DAY and will feature a large outdoor screen with a video of the 148 Missourians who died in the War on Terror.

Beginning at 7:00 PM each night, we will have a ceremony to remember our Fallen Heroes. The museum hopes to feature local choral groups or bands beginning at 6:45 PM.  Each night will conclude with Honor Guard, Rifle Salute, and “Taps.”  Many other special events are being planned.

On Saturday night, August 27th, the museum will recognize the one-year anniversary of the suicide bombing in Afghanistan, in which 13 Americans lost their lives.  On that night, we will dedicate a permanent Memorial to the Fallen Thirteen Heroes. Shortly after the program ends at dusk, thirteen lanterns will be released to honor them.

The museum hopes to build a permanent War on Terror Tribute on its grounds to honor all those who served later this year.  We recognize that when many of our troops come home, their battle just begins. The planned tribute will honor not only those who gave their lives, but also those who came home and are still experiencing the effects from their period of military service. 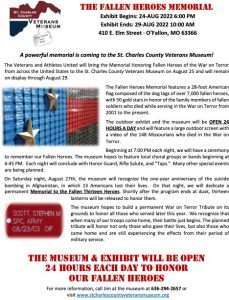