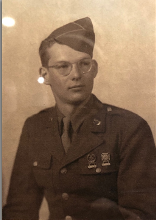 CPL. Roland (Bo) Sturhahn served 1944-1946 in the U.S. Army 2nd Division, 706 Tank Battalion during World War II.  Bo was stationed in the Philippines.  Before Bo was drafted he was fascinated by military history.  Bo clipped and kept articles from the St. Louis Newspapers about the war and started a scrapbook.  When he got home, he discovered his father continued to clip the articles for his scrapbook while he was overseas.  Bo’s collection includes all theaters of the war.  This unique collection of original newspaper photos and reports offers rare views and the progression of the war as reported to the folks back home. Bo died on Monday, March 15, 2021.

The Friends of Bo Sturhahn made a generous donation to the museum in his name. Thank you: