On Sunday, July 31st, the museum honored our Korean War Veterans.  Before the ceremony began, the audience was entertained with wonderful patriotic music by the After Hours Community Band. 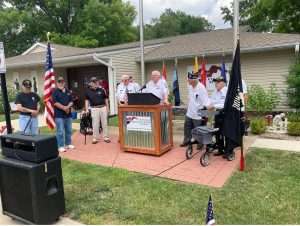 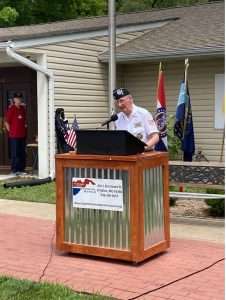 Our Master of Ceremonies was Chris Christifulli (above right) along with Art Minor, Korean War Era Veterans.  The guest speaker was Yong Moon Park, President of the Korean American association of St. Louis who expressed his gratitude to our Korean War Veterans.  He reminded us, freedom is never free.

The featured speaker was Kimmie Foster of the Korean War Veterans Association.  Kimmie told us about her family’s flight from Korea when she was just three years old.

There were many Korean War Veterans in attendance.  The Korean Americans present expressed their appreciation to the veterans with a traditional bow of tribute.

Approximately 34,000 U.S. Soldiers were killed including 944 Missourians, seven from St. Charles County. The museum honored their memory.  The Korean War marked the start of the Cold War. Koreans are steadfast in expressing their thanks for the U.S. help in repelling North Korean and Chinese forces. Sadly, in the United States, the war is often forgotten.  God Bless our Korean War Veterans.

Thanks to the Marine Corps League, VFW Post 5077, Gaylen Cardwell (Taps), Chaplain Bob Blake, and the After Hours Community Band.

Click on the video below for a glimpse of the event.