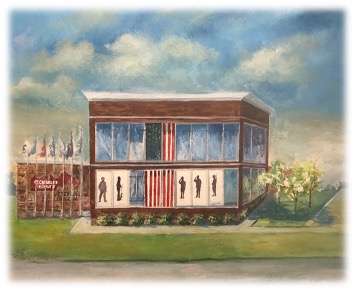 The St. Charles County Veterans Museum announced in February 2022, they accepted an offer from the City of O’Fallon for a lease on a parcel of land in front of the Justice Center at 1019 Bryan Road for the express purpose of building a new museum.  On the 2.45 acres, the museum will build an approximate 12,000-14,000 square feet museum.  The new building will include an auditorium, community conference rooms, giftshop, storage, offices, and indoor, and outdoor galleries.

The museum was the dream of Ralph Barrale a World War II veteran.  Ralph landed on Utah Beach in Normandy in 1944, served with General George S. Patton at the Battle of the Bulge, and was among the first troops to enter Dachau the oldest concentration camp in Germany.  He later served as an MP at the Nuremberg War Crimes trials.  When Ralph moved to St, Charles County, he wanted to build lasting memorials that honored veterans for their sacrifices and service.  His first mission was to petition cities along Highway 70 to change the South Service Road to Veterans Memorial Parkway which he accomplished in a couple of years.  Next, he petitioned the State of Missouri to name the new Highway 364 bridge, Veterans Memorial Bridge which became a reality in December 2013.  His last dream began with a subtle comment, “If I was 25 years younger, I’d build a museum to honor our local veterans.”  Fortunately, his close friends gathered around him said, “We are twenty-five years younger, let’s do it.”

We received the keys to 410 E. Elm Street in October 2018 and construction began immediately.  The museum’s grand opening was 12-APR 2019.  Unfortunately, Ralph passed on 9-OCT 2018.  While Ralph was not there to see the museum open, we know he is watching and guiding our dedicated team of volunteers.

Ralph’s dream came to fruition and having outgrown the building, the dream will continue to grow.  Written on our walls is a very simple message.  “No one is ever gone as long as someone still has memories of them.”  The mission of the museum is straightforward.  We preserve the stories of our local veterans, so their stories are remembered for future generations.

In November 2022, the Museum Board of Directors announced they selected an architect firm.  They chose Dickinson-Hussman Architects (DHA), located at 11 E. Lockwood Avenue in St. Louis, Missouri.  DHA and our board of directors will begin drafting plans early in 2023.  The museum is looking for founding sponsors for the new building.

What many people do not understand, the St. Charles County Veterans Museum is a 501C3 non-profit business.  The museum receives no support from St. Charles County or local municipalities.  To serve a wider community, we will soon be rebranding the museum as the Mid America Veterans Museum.  The museum will begin fundraising soon.  To build the dream will require a strong, giving community that believes in our mission.  If you’d like to be part of the dream, please call us at 636-294-2657.