We lost one of our local Heroes on 26-JAN 2022.  Francis (Frank) Stahlschmidt was a longtime resident off the county.  Frank served honorably in the United States Navy from 1959-1961 as an air traffic controller RATCC-17, radio name “Gandy” while stationed at US Naval Base Mayport in Jacksonville, Florida.   Frank was instrumental in the safety and security of the United Stated during tensions with Cuba and during the Cold War.

Frank was the youngest of 14 children raised on the family farm in West Alton.  Their family has served in the military from the Civil War to Operation Enduring Freedom. 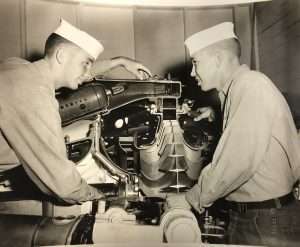 Frank is on right

On Saturday the family dropped off some of Frank’s military keepsakes and we will be adding them to the Cold War exhibit.