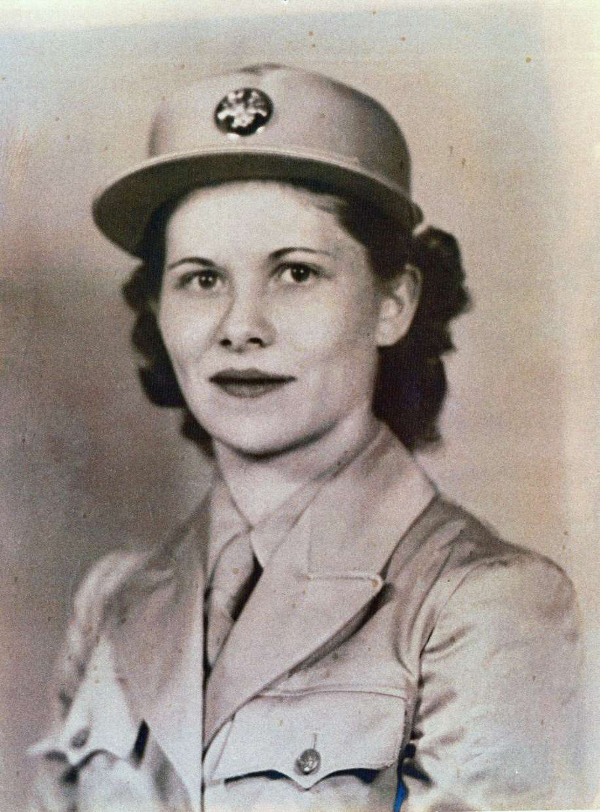 The museum lost a friend when we learned of the passing of Inez Satterfield Pinnell.  Inez, age 100, of Owensville MO died on July 16, 2020. We had the privilege of meeting Inez last summer at Twin Oaks Heritage Point Nursing facility in Wentzville and interviewing her for the museum just days before the COVID quarantine.  Inez, an adventurous woman and pioneer, served in the Women’s Air Corp for two years as a Corporal (T5) during World War II.

Inez reflected in her memoirs: “Why couldn’t I have been a boy so I could have enlisted in the service? I wonder why they don’t have a woman’s organization like they do for men?  Little did I realize in a few months that very thought of a Women’s Army Auxiliary Corps was being discussed as something that would actually happen.

“Imagine my surprise when on a Sunday afternoon in the month of August 1942, while reading through the Sunday paper I stumbled across an article saying that the WAAC’s were a reality and not just a corps to be forgotten. It stated that there were several women already going to Officer’s Candidate School at Fort Des Moines, Iowa, the first WAAC training center in the United States.  Then and there I decided I would enlist soon. I wondered what my parents would think of my enlisting.

“For weeks I kept reading any information I could find about the WAAC’s. Finally, I decided it might be wise and write to drop a gentle hint to my parents of my intentions. I wanted them to have time to think it over and discuss it and then give me their opinion. To my disappointment they didn’t much want me to enlist, but nevertheless, if that was my wish their answer was, ‘It’s your life and you have to live it for yourself.’ None of my sisters and brothers thought too well of the idea so now I was quite undecided what to do.”

After basic training, Inez went to Cooks and Bakers School and was given the rank of T-5 Corporal. Her class stayed on in Daytona Beach, replacing the men who trained them. As men went off to war, Rosie the Riveter became the symbol of women’s entry into the workforce to replace them in factories and assembly lines. In an ironic twist, Inez’s platoon of WAACS took over the traditionally feminine tasks of food preparation to free the men to go out in the field. Every six weeks a new group of WAAC’s arrived for training, after which time they were transferred to other locations. Inez finished her story with a simple, “It was a great experience for me.”

After the war she married Bill Pinnell and worked for General Motors in St. Louis for 32 years.

You can read Inez’s story, as well as those of other local veterans under stories.