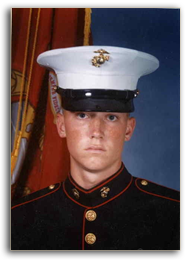 Drew W. Weaver was born 5-JUL 1987.  His parents were Brian Weaver and Diane Spaulding.  He lived in St. Charles Missouri and attended St. Charles West High School graduating in 2005.  Drew and his best friend, Marine Corporal Ryan Hanson, joined the Marines together right after high school and went through basic training together. Ryan literally was by his side in the beginning…and at the very end.

Everyone says Drew found the best in every situation.  He was able to find the silver lining in every cloud.  He always tried to make work fun for himself and the other workers. He had a positive attitude and great sense of humor. His friends said, he had a strong pride and sense of purpose in being a Marine.

Lance Cpl. Drew Weaver was killed in action on 21-FEB 2008 while conducting combat operations in Asad, Anbar province in Western Iraq. His unit was on patrol when it came up to a truck that then sped away. The soldiers gave chase with Weaver in the lead. When they caught up with the truck, Weaver turned to warn his fellow Marines and a bullet hit him in a spot that wasn’t protected by his vest.  He was twenty-years old.  Weaver and his platoon were days away from completing Operation Desert Siege, an 18-day field operation that was designed to disrupt insurgent activity in the far edges of the of the Al Anbar province.