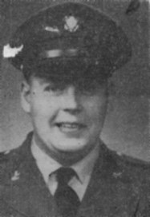 William Richard Maryfield was born 14-DEC 1943. He is the son of Mr. and Mrs. Harold Maryfield of RR 4 in St. Charles MO. William graduated in 1961 graduate from Pana High School in Illinois. He enlisted with the Army on 14- DEC 1962. SGT. Maryfield started his tour of Vietnam on 1-MAY 1967. He was in the Americal Division, 23rd Support Battalion, A Company. He died in the line of duty from a non-combat related incident on 14-MAR 1968

while serving as a Laundry & Bath Specialist {57E40} with Co. A of the 23rd S&T Battalion, Americal Division. His death is classified as: Died through non-hostile action, accidental homicide.

Posted on vvmf.org: On 14-MAR 1968, SGT Maryfield and another person from his company were at their base camp in Chu Lai where they were joking around with their weapons when the other person pointed his gun at Maryfield and it discharged. Maryfield was fatally injured in the incident. The Army coded his loss an “accidental homicide.” He died in Tam Ky, Quang Nam, Vietnam.