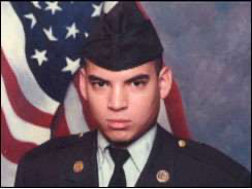 Richard T. Davis was born 14-MAR 1978 on an Army base in Germany. His parents were Lanny Lay Davis (1949-2009, a Vietnam Veteran) and Remedios Ong Davis. He had one sister; Lisa. Richard grew up as an “Army brat” in Missouri, Kansas and California. The Davis family moved from St. Charles while Richard was still young. Richard joined the US Army in 1998 after high school, training at Fort Sill, OK for basic and field artillery and was then stationed at Fort Hood, TX.

After his training, he was sent to Bosnia for his first assignment. After September 11, 2001, he decided to leave the Army. Richard later rejoined the Army in JAN 2002. He was sent to Kuwait for Operation Desert Spring in 2002 to prepare for the war in Iraq. He was assigned to 3rd Platoon of Baker Company in 1st of the 15th Infantry, 3rd Brigade of the 3rd Infantry Division (Mechanized) and engaged in some of the worst battles in Operation Iraqi Freedom in 2003.

Upon his arrival back to the states, Richard didn’t call his parents to tell them he was back. He and four other soldiers from his company went for a night out to celebrate their return. At some point, someone apparently insulted one of the dancers at the club and the soldiers were kicked out.

His friends later told police they were upset about it and started brawling with Davis in the parking lot. They left and drove about three miles before the driver pulled the car over and another argument began. Just two days after his return to the United States, Richard mysteriously vanished. Richard was declared AWOL. His charred remains were discovered in the woods four months later. What happened to him only came to light months later.

On 15-JUL 2003, less than two days after returning from deployment to Iraq, Davis was murdered outside Fort Benning, Georgia by a fellow soldier from Baker Company, Alberto Martinez. Three other soldiers were also present and involved in the events that led up to the killing and followed the killing. Initially, the Army concluded that Davis deserted. Despite pleas from Davis’ father, the Army would not initiate an investigation into his son’s disappearance for nearly two months. Davis’ remains were not found until November 2003. He had been stabbed in the head, neck, and chest at least thirty-three times. His body was later dismembered, doused in lighter fluid, and burned. Unnamed sources have suggested that Davis was killed because he had planned to make a complaint about a rape of an Iraqi woman by US troops.

On 17-FEB 2004, Mario Navarette, Alberto Martinez, Jacob Burgoyne, and Douglas Woodcoff were indicted by Georgia authorities for the murder. Burgoyne pleaded guilty to voluntary manslaughter and was sentenced to 20 years in prison. Woodcoff pleaded guilty to concealing the death of another and was sentenced to probation. At trial, Navarette was convicted of felony murder while in the commission of an aggravated assault, aggravated assault, possession of a knife during the commission of a crime and concealing the death of another. Martinez was convicted of the same charges and malice murder. Navarette and Martinez were both sentenced to life plus fifteen years in prison.

The story of Davis’s murder garnered national attention because he was killed by fellow soldiers and because of the possible role of post-traumatic stress disorder as a factor in the crime. Davis’s murder was the inspiration for the 2007 Academy Award-nominated film In the Valley of Elah.