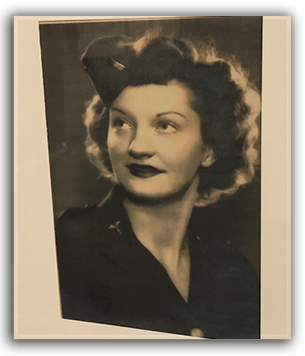 1st Lt. Jeanette Zielanis Huff served in the Army Nurse Corps from February 1944 to May 1946.  Disqualified from overseas duty because of her poor eyesight, she served as a general duty nurse assigned to the Army Air Forces at various bases on the West Coast and Washington DC.  She kept two large scrapbooks filled with documents, letters, mementos and photos which are an extraordinary record of the Army Nurse Corps and her experiences.  Jeanette was a tall, attractive brunette who bore a striking resemblance to film star Jane Russell.

Jeanette organized a little trip to Hollywood with the other nurses to 20th Century Fox studios to visit the set “Something for the Boys”, the latest film featuring Carman Miranda.  In the museum we have a photo of the group with the movie star and a letter from the studio commemorating the event.

Jeanette met her husband Lawrence Huff after the war was over when they were both working at the VA Hospital.  During the war, Lawrence was with the 104th Infantry Division.  The division, nicknamed “Timberwolf” was under the command of Major General Terry de la Mesa Allen who had previously led the 1st Infantry Division in combat in North Africa and Sicily.  General Allen had instilled the men with his core principals of combat success : “find ’em, fix ’em, fight ’em”…”take the high ground”…”inflict maximum damage to the enemy with minimum casualties to ourselves, night attack, night attack, night attack.”

Lawrence used to tell his children, “Your mother spent the war in California enjoying the officers clubs and hobnobbing with movie stars.  I was in the mud, in Belgium and Germany.”