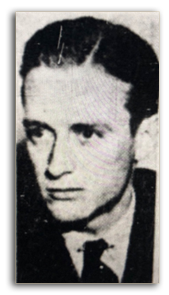 The Wentzville Union reported on 10-MAR 1944, “He quickly earned a reputation not only as a good prosecutor, but as a faithful servant of the people.  He was always friendly, courteous and ready to render service to the people of the county as well as doing the best for the state and country.”

He resigned during his second term in January 1942 to serve his country in the U.S. Navy.  He enlisted 9-MAY 1942.  He was a Lieutenant in the U.S. Navy Reserve.  He requested oversea duty and was serving in a war zone beginning in July 1944.  He was executive officer and navigator of a warship on LST 208 (Landing Ship Tank) while serving in the Navy in the Atlantic.  An LST typically carried tanks, wheeled and tracked vehicles, artillery, construction equipment and military supplies.  An LST carried a crew of 13 officers and 104 enlisted men  He served in Normandy France just after the D-Day landings.  LST-208 earned one battle star for World War II.  Another report lists him as being on a destroyer.

David Alphonse Dyer died 26-FEB 1944.  He was 32.  Newspapers reported he drowned in the Atlantic saying, “no other details were known.”  The Navy, Marine and Coast Guard Casualty list says, killed in action.  He is buried at St. Charles Borromeo Cemetery in St. Charles MO.

David is honored and remembered at the St. Charles County Veterans Museum.