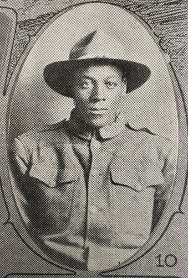 Julius Stephen Baugh was born 23-AUG 1891 in Dardenne, MO. His father was George Baugh, and his mother was Bettie Cosley Baugh. When he registered for the World War I draft he lived in O’Fallon MO. He listed farm laborer in Gilmore MO as his occupation. He entered the service 28-OCT 1917. He left for France on 10-JUN 1918 from Hoboken NJ aboard the troopship Orizaba. He served in Company D, 351st Machine Gun Battalion of the 92nd Division. The 92nd Division was nicknamed the “Buffalo Soldiers.” Parts of the 92nd would see combat action in France.

The U.S. organized two divisions of segregated men, the 92nd Division and the 93rd Division for WWI. The 92nd would carry the name “Buffalo Soldiers” as their nickname and the 93rd would be known as the “Blue Helmets.” Even though these African Americans established an African American presence in the AEF, American leaders at the top would still shun them. Much of the 92nd would be relegated to logistics and support, behind the front lines. When both divisions arrived in France, General John “Black Jack” Pershing was more than willing to lend both divisions to the French army to fight under the French command and flag. Parts of the 92nd would see combat action in France while mostly all of the 93rd would fight in combat. These African-American soldiers would wear the American uniform, but would don the blue French helmet and utilize French military equipment. They quickly dispelled the American Army’s belief that they were inferior soldiers as they heroically and valiantly fought in fierce combat throughout the war. As a result of their actions, France would award several honors and medals upon multiple regiments in both divisions. Some of these noble awards were equivalent to the U.S. Medal of Honor.

Joseph Baugh left the service on 26 Mar 1919 at Camp Funston KS. He registered for the World War II (“Old Man’s Draft) in 1942. At that time, he lived on School Street in St. Louis. He worked for Bill Nikerson. His wife was Effie Bailey Baugh. They had one child. Julius Stephen Baugh died 10-NOV 1947 and is buried at Jefferson Barracks National Cemetery in St. Louis MO.