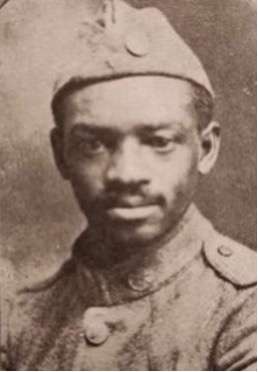 William Wyatt was born 12-AUG 1892 (Editor note:  This is the date on the death certificate.  Other dates show 18-AUG 1893).  He lived in St. Charles MO.  His parents were Scott and Annie Wyatt.  His occupation on his draft card was “Foundryman.”  He worked for American Car and Foundry a war material suppler in St. Charles MO.  He entered the service on 29-OCT 1917.  He was a Corporal Company H, 365th Infantry Regiment, 92nd Division. He went overseas 19-JUN 1918.  The 92nd Division was nicknamed the “Buffalo Soldiers.”  Parts of the 92nd would see combat action in France.

The U.S. organized two divisions of segregated men, the 92nd Division and the 93rd Division for WWI. Even though these African Americans established an African American presence in the AEF, American leaders at the top would still shun them. Much of the 92nd would be relegated to logistics and support, behind the front lines. When both divisions arrived in France, General John “Black Jack” Pershing was more than willing to lend both divisions to the French army to fight under the French command and flag. Parts of the 92nd would see combat action in France while mostly all of the 93rd would fight in combat. The African-American soldiers would wear the American uniform, but would don the blue French helmet and utilize French military equipment. They quickly dispelled the American Army’s belief that they were inferior soldiers as they heroically and valiantly fought in fierce combat throughout the war. As a result of their actions, France would award several honors and medals upon multiple regiments in both divisions. Some of these noble awards were equivalent to the U.S. Medal of Honor.

William Wyatt was discharged on 13-MAR 1919.  His wife was Ora Lee Wyatt.    He died 25-MAY 1968.  His death certificate says parents are unknown with “Annie” wrote with a question mark.  His last occupation was listed as a janitor with a “private family.”  He is buried at Jefferson Barracks National Cemetery in St. Louis MO.  Picture on FAG.