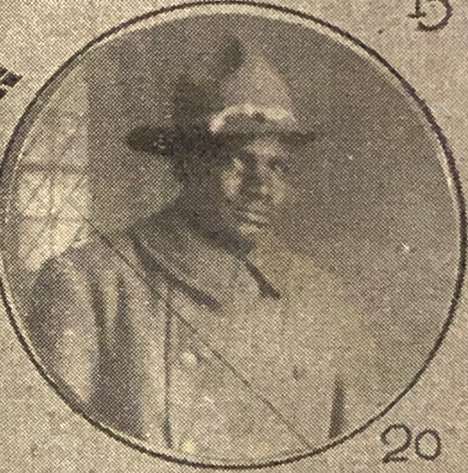 James Abington was born “around” Flint Hill.  According to his WWI draft registration birth date his birthplace and date is “unknown.”  The Veterans Administration lists his birthday as 1-APR 1896.  His parents were James and Mary Abington.  He entered the service 17-JUN 1918.  He was a Private 1st Class in the Army in Company B, the 349th Machine Gun Battalion, the 92nd Division.  The 92nd was comprised of primarily African American combat units. nicknamed the “Buffalo Soldiers” in honor of African American troops who served in the American West after the Civil War. Parts of the 92nd would see combat action in France.  They quickly dispelled the American Army’s belief that they were inferior soldiers as they heroically and valiantly fought in fierce combat throughout the war.

James was discharged 30-JUN 1919.  He is shown in the 1940 census as a lodger in rural St. Charles County.  His occupation was listed as a farmer.  When he registered for the World War II or “Old Man’s Draft” he wrote as his contact, Cora Abington, and he owned his own farm four miles from Wentzville MO. He died 23-MAR 1968.

According to his death certificate, his birthdate was 12-JUL 1895, and he was a widow and living near Wright City MO.   His grave marker lists his birthday as 17-JUL 1895.  James Abington is buried in Jefferson Barracks National Cemetery in St. Louis County MO.