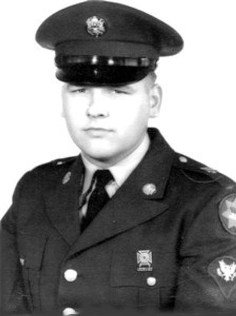 It has been a long time since we talked. You have no idea how many times I have thought of you. I will never forget the look on your face when we retrieved Knight’s body out of the river. We were together in my boat on another night when you said you would give $20 for a decent cup of coffee. You were gone a few nights later. I left one for you at the wall. When we meet again we’ll have one together. For certain and roger that. Till then my friend…

IN HONOR OF RICHARD ADAMS…..

Richard was my step-brother and though I didn’t know him well, I had great respect for him. Rich returned to Vietnam four times. His reason? He was single and if he went another man with a wife & family wouldn’t have to go. What greater honor is there than to offer one’s life to save another…

Richard is on the Wall on Panel 16W, Line 044.  Richard’s funeral was at St. Charles Borromeo Church in St. Charles Missouri and he is buried at Jefferson Barracks National Military Cemetery.