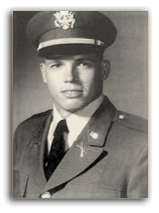 Alan was a 1LT Lieutenant, helicopter pilot in the U.S. Army and served in Vietnam.  Alan started his tour on 8-SEP 1968.  He served in the 1st Aviation Brigade, 170th Aviation Company.  Alan was initially reported as missing on 8-JAN 1969.  Next of kin was notified 28-JAN.  The report was later changed to killed in action on the same day.  Alan died when through hostile action when his Bell UH-1 Iroquois (Huey) was hit coming out of a pickup zone, flew a short distance and then crashed West of Ben Het SF Camp.  The Huey crashed, caught fire on land in South Vietnam, Quang Tri province on 8-JAN 1969.

All crew members and passengers were killed in the crash and fire.

1LT Alan Clark Gilles was awarded posthumously a Purple Heart, an Air Medal and the Silver Star.  The citation for Silver Star reads:

The President of the United States authorized by Act of Congress 9-JUL 1918 (amended by an act of 25-JUL 1963) takes great pride in presenting the Silver Star (posthumously) to First Lieutenant (infantry) Alan Clark Gilles United States Army, for gallantry in action in connection with military operations involving conflict with armed hostile force while serving with the 170th Assault Helicopter Company, 11th Aviation Brigade, in the Republic of Vietnam on 8-JAN 1969.  First Lieutenant Gilles distinguished himself by exceptional valorous actions while serving as an aircraft commander of a UH-1H infantry carrying helicopter.  A Special Forces reconnaissance force team called for extraction assistance, as they had become encircled by a large hostile force and were in the process of being overrun.  He immediately volunteered for the mission of extracting the trapped men.  Arriving at the extraction site, it became evident the area was hazardously plagued with mountains and dense jungle foliage.  Despite these conditions, First Luminant Gilles expertly and courageously guided his aircraft amidst the dense jungle foliage, completely disregarding the danger from the ever-increasing intensity of the enemy’s fire.  He avoided the enemy’s fire, set down in the landing zone and loaded the reconnaissance team aboard.  But as he began his ascent from the landing zone, his aircraft was riddled with enemy fire and in a matter of seconds all the transmission oil was gone.  The rotor blades froze, and the aircraft crashed to the ground, mortally wounding First Lieutenant Gilles.  His actions were in keeping with the highest traditions of the military service and reflect great credit upon himself, his unit and the United States Army.

Alan is honored on the Vietnam Veteran’s Memorial in Washington DC. His name is inscribed on Panel 35w, Line 54. Alan Clark Gilles is buried at Eternal Valley Memorial Park, in Newhall, California.

Alan is honored and remembered at the St. Charles County Veterans Museum on the Wall of Honor.