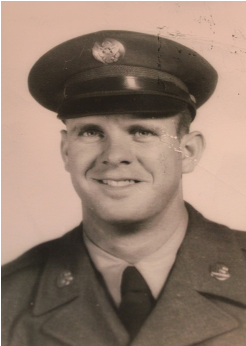 Albert J. Koch Jr. was born 18-APR 1930.  Albert’s father was Albert James. Koch and his mother was Olga Algermissen Koch.  Albert had three sisters; Marie, Elvira, and Lucille.  Ironically, it was a typhoon named “Marie” that Albert would encounter in fall of 1954.

Albert lived on the family farm on Route 1, Koch Road in O’Fallon MO.  Albert graduated from Assumption High School in 1948.  He was inducted in the Army at Camp Crowder in Missouri 23-JAN 1953.  He completed basic training with the 5thArmored Division at Camp Chaffee 5-JUN 1953.  He was then stationed at Camp Crawford, Hokkaido Japan on 25-JUL 1953.

Albert wrote letters to his parents back home.  Here are a few.

Just a line to tell you I am going to be shipped to Camp Crowder sometime today so if I don’t get a chance to see you for a while don’t worry because I am going to be all right.  I will write as soon as possible do the same goodbye for now.

Jut a line to tell you I am doing pretty good.  The army is fair so far good eating and a little fun but not like at home.  We went to the show last night and this afternoon we went to another one it was pretty good.  There is 4 boys sitting aside of my bed good buddy’s all looking for friends one is from St. Charles.

We go to the px and drink beer every now and then.

I wrote to Edna this afternoon to [sic].

There is 44 boys in this room when they are all in bed.  L. Dames and Jim S. and S. Huber are all up here I see them a couple of times a day in a different camp.  I went to church at 9 o’clock this morning.

Well I guess I will close for now if you know any news write and tell me how is every think [sic] at home.  I hope all right.

It is Monday evening so I am going to write you a few line.  I got the paper that you sent so I spent some of my time reading.  We don’t do much of late except clean up the place for the Japanese and its got to be in tip top shape before they will except [sic] it and the government are spending a lot of money on these people.  I had a little drive the other day a 110 miles around [sic] trip took a load of tables down to the ship so I guess we will move before long sure will make our time go faster be a lot of new things to see down there we are going to a place near Tokyo I believe it is close to wear Maurice Olendorf was stationed.  I am going to get a 24 hour pass tomorrow so I guess I will take it easy this army sure does make a man lazy but I may as well take off no need to do any more then you got to in this so called army.

How did you like the fair sounds like they had a big affair bet they had a big crowd,  How many shocks of corn did you cut this year have you got any corn in it. Well it is getting late  so for now goodnight ad take care of yourself.  I am fine hope you all are the same.  Bye-Bye.

Received your letter with the pictures last week and will answer this evening the pictures are good glad you sent them home.  So you are going to move near Tokyo guess you will be glad as it will be a change of scenery.  Maurice O. is expected home this week he said Sept 10 he wrote.

We had a heavy rain last week about 4 in. sure washed the ground on these hills have been working on the ground intent to start sowing wheat tomorrow the 27th but it looks like rain here tonite [sic].

Read in the paper about that awful storm over there.  I think it was near where you are hope you went thru it alright.  The paper describes it as being awful a lot of lives lost.  This all happened at Hokodate harbor in Iwanai write soon and let us know all about it am wondering how near you were in it.  Cliff is combing beans they are bad this year about 10 bu too [sic] the acre too dry and hot for them. Don’t know any more to write and it is getting late so I will close for this time hoping you are well write and let us know about the storm.  With love from all.

On 26-SEP 1954 Albert boarded the ferry Toya Maru at Hakodatr, Hokkaido Japan bound for Admori Honshu, Japan.  Albert was part of an advance party sent south to set up a new duty base at Camp Younghans near Sendai on Honshu.

Weather forecasters were caught off guard by the storm. They had predicted winds of about 55 miles an hour in the Hokkaido-Honshu Straits.  The Toya Maru moved into the center of the storm, where winds were estimated at 118 miles an hour on its trip from Hakodate to Amori (Honshu).  The typhoon had been moving northeastward through the Sea of Japan (East Sea; along Japan’s western coast) at speeds exceeding 40 miles (65 km) per hour and struck northern Honshu and southern Hokkaido (which are separated by the Tsugaru Strait) on the afternoon of 26-SEP. Although the Toya Maru’s voyage from Hakodate (on Hokkaido) to Aomori (on Honshu) had earlier been canceled because of the severe storm, the ship’s captain decided to depart in the evening after the weather had appeared to improve. The typhoon gained strength shortly after the Toya Maru left the Hakodate dock about with a full load of passengers and railway cars. The Captain quickly decided to drop anchor in the harbor in order to ride out the typhoon, but the anchor failed against the severity of the storm. The ship was dragged out of the harbor and onto rocks by the gale-force winds and high waves. Cast adrift, the ship listed severely, and water was able to enter the lower decks and the engine room, rendering the ship’s engine inoperable. Some equipment broke loose and started a fire.

With its cargo of train cars breaking loose from their moorings and crushing passengers, its engines out of order, and water continuing to pour into the ship, the Toya Maru could not be saved.  The Toya Maru capsized and sank a short distance off the shore of Hakodate, killing most of the people on board. The disaster was compared to the sinking of the Titanic in Japanese reports at the time.

Typhoon No. 15 sank several other cargo ferries and some 200 other sea vessels on September 26. Although the other ferries did not carry passengers, approximately 275 crew members were killed, which brought the total number of fatalities at sea to more than 1,430. The total death toll on land and sea across Japan from the typhoon exceeded 3,000, with the number of vessels destroyed, damaged, or sunk estimated at about 1,130.

Tōya Maru arrived at Hakodate after its first journey that day from Aomori. She was originally scheduled to return at 14:40, to arrive at Aomori just before Typhoon Marie. However, due to the expected storm, another ferry – Dai 11 Seikan Maru, a somewhat poorer quality vessel – could not depart on her scheduled journey to Hakodate. Therefore, passengers and vehicles were transferred to Tōya Maru, delaying her departure.

The captain of Tōya Maru decided to cancel its journey.

Following heavy rainfall in Hakodate, the weather cleared up and the outlook improved. The captain, presuming that the typhoon had now passed as predicted, decided to proceed with the journey to Aomori. However, by this time the typhoon had only slowed down and was predicted to remain over the strait for an entire day.  A typically, the typhoon gained strength in the Sea of Japan. It was considered to have already become an extratropical cyclone when it reached Japan.

Tōya Maru departed from Hakodate with approximately 1,300 passengers aboard. Shortly thereafter, the wind picked up coming from a SSE direction.

Tōya Maru lowered its anchor near Hakodate Port to wait for the weather to clear up again. However, due to high winds, the anchor did not hold, and Toya Maru was cast adrift. Water entered the engine room due to the poor design of the vehicle decks, causing its steam engine to stop and Tōya Maru to become uncontrollable. The captain decided to beach the sea liner onto Nanae Beach, on the outskirts of Hakodate.

Tōya Maru beached, and an SOS call was made. However, the waves were so strong that the sea liner could no longer remain upright.

On 26-SEP 1954, the advance party of American soldiers from the 99th Field Artillery Battalion of the 1st Cavalry Division Artillery who were traveling from Hokkaidō to set up a new camp (Camp Younghans) at Higashine, Yamagata, near Sendai lost their lives in the capsize of this Japanese ferry boat.

More than 1,000 people lost their lives in the sinking of the railway ferry, which caught fire before it sank. The only American soldier to survive was PFC. Frank Goedken, of Iowa, who was swept through a porthole and fought his way ashore with the aid of a life belt and a raft.  The 57 Americans who were lost were 49 soldiers, two wives of military men, two other women, one male army civilian employee, a child, and two male civilians.  Only 196 people, including 13 members of the crew, Private Goedken and a Canadian missionary, survived the sinking of the ferry boat.

It was a grim sight as parties of doctors and ambulance men stood on the beach at Hakodate today, watching mountainous waves wash ashore one body after another from the typhoon disaster.  The Japanese Prime Minister (Mr. Yoshida), who is in Vancouver, said last night that he was “horrified and deeply saddened” at the news of the typhoon.  One month later divers were still recovering victims from the ship.

Nearly all the Hokkaido executives of the National Railways Corporation, owners of the ferry, were on the Toya Maru.  The company suspended normal services today but found ships from its depleted fleet to carry bereaved relatives to Hakodate free of charge.

PFC. Albert J. Koch Jr. had a mere 56 days to serve before his planned honorable discharge 20-NOV 1954.  He died 26 SEP 1954.  On 15-OCT 1954 a memorial service to honor Albert and the others that perished in the in the Hakodate ferry disaster was held at Camp Schimmelpfennig Sendai Japan.  In a letter to his parents, Albert was called by Major General A.D. Mead, U.S. Army commanding, “A man for whom all of us can be proud.”

The Army today released the names of twenty U.S. soldiers identified as victims of the sinking of the ferry boat Toya Maru on 26-SEP in northern Japan waters.  The total known to be dead now totals thirty-six.  The names released today included PFC. Albert Koch Jr. of O’Fallon MO.  All the victims had been previously listed by Japanese authorities.

Albert’s body was recovered a few days after the disaster.  Albert J. Koch was returned to his hometown of O’Fallon Missouri on 11-NOV 1954 and after services on Monday was buried in Assumption Cemetery.

All of these items were in the sea for days and reflect the effects of salt water corrosion.

Albert is honored and remembered at the St. Charles County Veterans Museum.