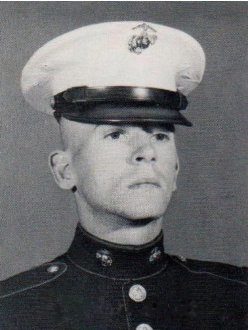 Adrian Laurence “Larry” Allen was born 10-MAR 1948 in Selma Alabama.  He was the son of Mrs. Elizabeth M. Allen  2525 Randolph Street in St. Charles.  Larry graduated from Parrish High School in Selma AL.  He had two brothers; Floyd and William and two sisters; Connie and Suzanne.   Larry enlisted 9-DEC 1968.  He served with the 1st  Marine Division, 3rd Battalion, Company M.  He was a Lance Corporal, Rifleman and began his Vietnam tour 29-JUL 1969.  Larry was wounded in August but quickly returned to duty.

Adrian Laurence Allen was killed in action 9-OCT 1969.  He died from missile and small arms fire and M-79 fire from a squad sized ambush in Quang Nam Province.  He was engaged to be married at the time.  Larry was in Vietnam about two and a half months.  Adrian Allen is on Vietnam Wall Panel 17w, Line 54.

From St. Louis Post-Dispatch; Lance Corporal.  “He had returned to duty after being wounded in August of 1969.  Surviving is his mother, two sisters (in Pennsylvania) and two brothers (St. Charles, MO) and a half-brother in Tennessee.”

From Chillicothe Constitution Tribune.  “A Missouri man was among 26 Americans listed by the Department of Defense as killed in Action.”  He is buried in Roselawn Memorial Park in Tennessee.  Adrian has Several family members in St. Charles.  Newspaper calls Allen a Missouri man.