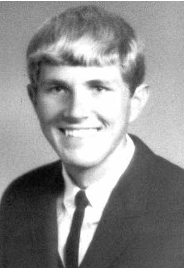 Bryan Rankin, was born on 21-MAR 1950.  Andrew lived at 14 Flamingo Drive in St Peters MO.  Andrew graduated from Fort Zumwalt High School.  His father was Ira Cowden Rankin and mother was Mrs. Wilma Bryan Rankin.  Andrew had one brother, John and two sisters; Kim and Periane.  Andrew enlisted in the Marine Corps and served in the Vietnam War in the 1st Marine Division, 2nd Battalion, B Company. He began his tour on 18-DEC 1968 and his occupational specialty was rifleman. He had the rank of E-3, Lance Corporal

On 29-APR 1968 at 1:00 PM during a search and clear mission with a squad sized patrol in Quang Nam province, South Vietnam, Andrew tripped an enemy explosive device (mine).  He was evacuated to the 95th Evacuation Hospital in Danang.  Despite the efforts of the medical personnel, he died of his wounds at 5:50 PM.

The official Department of the Navy Report of Casualty Reported, “Andrew died from wounds sustained from fragmentation wounds to the head and body from a hostile explosive device while on a search and clear mission.”  Andrew was in country 4 months, ten days.

Andrew’s Captain would write his parents saying, “Andrew was well respected by all that knew him.  He impressed everyone with his eager manner and courteous demeaner  and took pride in doing a job well.  Andrew will be keenly missed.”

Andrew’s brother, John donated his Purple Heart, uniform, flag and other memorabilia to the St. Charles County Veterans Museum where it is permanently displayed.  John told us, please exhibit the photo booth pictures of Andrew because, “that is the goofy brother I remember, and I want others to see him that way.”

The following letter from Andrew to his parents is also displayed.

Well here’s my pay check $211.00.  I am doing alright.  I got your letter today about Doug getting killed (Douglas Drue Gaylord his friend also on our Wall of Honor).  It’s really hard to believe.  Give Mrs. Conley my feelings.  This stinkin war they get the good guys.  They should send guys like Rap Brown and punks like that.  And mom don’t worry about me getting hurt when it is my turn to get it there’s nothing I can do about it.  If God wants me to go, I’ll go but you know where, up in heaven, so if I go, you’ll see me again one of these days right.  Well I’ll go for now.  Just remember I’ll always love you and dad with all my heart and I think you are the best parents anybody could have.

This was one of the last letter Andrew wrote.  The Doug, Andrew writes about, is Douglas Drue Gaylord a friend of Andrew who also lived in St. Peters who was killed on action on 16-MAR 1969.  Doug is also on our Hall of Honor.

This note was posted by Bill Powers on the Wall of Faces.  He served with Andrew.

“I served with Andy in 2nd Squad, 2nd Platoon, Echo Company, 2nd Battalion, 1st Marines, 1st Marine Division. Andy arrived in country a couple of weeks after I did. He was killed by a mine while I was still recovering from wounds at the Naval Hospital in Guam. I learned of his death while moving through Okinawa back to Vietnam. Andy always felt he would never leave Vietnam alive. Despite his trepidation, he served with honor and bravery. He was a Marine.”

Andrew is honored and remembered at the St. Charles County Veterans Museum.

AndrewRankinDownload
The following is a narrative provided by Gary Johnson.  Gary was the hospital corpsman who cared for Andrew “Andy” Rankin when he was wounded in Viet Nam on April 29, 1969.  Gary visited the museum and shared this narrative with the museum recently.  Gary’s story is touching and reflects great devotion to those he served.

A Story of God’s Grace_AndrewRankin