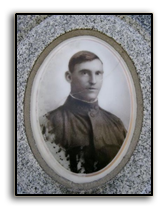 Archie Marvin Bowman was born 23-APR 1894. His mother was Tienna “Christina” Suesdorf Bowman and his father was  Jasper Bowman.  They married In 1882. They lived on a farm in St. Charles County not far from the village of Hamburg.*  The family farmed about forty acres about a mile north of Hamburg in what now is Weldon Spring Conservation Area.

Archie had two sisters; Maida and Della and one brother; Melvin.  Archie’s father, Jasper died in January 1908.  Melvin was 17 and Archie was 14.  They worked on the farm all of their lives.  Neither boy had finished grade school.  They kept the farm going while their father was sick and after he died.  Archie quit school to help his mom run the farm after his father died.  Melvin married in 1915.  He brought his wife to the family farm.  Archie had a sweetheart and may have married her except that World War I intervened.

On 28-APR 1918 just a few days after his 24th birthday, Archie was inducted into the Army.  Archie trained at Camp Funston (now Fort Riley) Kansas.  Archie’s mother Christina is listed as a dependent on his draft registration card.  He was placed in the Infantry and given orders for Europe.  Archie and the men of Company A, boarded a train for New York.  From there they sailed on the troop ship HMS Caronia for Liverpool England.  His sweetheart wanted to get married before Archie shipped out, but Archie said, no he didn’t want to leave her a widow.  Archie didn’t expect to survive the war.

Archie was in Company A of the 356th Infantry Regiment of the 89th Division.  Archie was a participant in the last great battle of the war, the Meuse-Argonne offensive.  In the month and a half long battle, the Allies fought their way through the Argonne Forest and up to the Meuse Valley.  During one four day period in mid-October, Company A was surrounded by the German army and survived on starvation rations before being rescued on 22-OCT.

As the American forces advanced toward the border of Belgium in early November, Company A was down to eighty-one men including Archie Bowman.  They spearheaded a four mile advance north from the village of Barricourt to the village of Nouar on 3-NOV.  It was a day of intense combat as Company A endured German planes, artillery and machine gun fire.  The next day, Company A fought northeast about 5 miles through the Dieulet Forest approaching the heights over Meuse River and occupying the small village of Pouilly.  It was during this action, that Archie Bowman was mortally wounded.  According to documents in his burial case record, Bowman was “missing in action” during the “action of crossing the Meuse River.” When questioned after the event, no one in the company remembered seeing him during that action so it is probable he was wounded early in the fight.*  On 11-NOV, Bowman was classified “DWRIA” Died of Wound Received in Action.  Documents describe his wound as a “large hole in both sides of skull.”  His death was instantaneous.

Company A then advanced to north, Meuse River toward the town of Sedan. They were the last American unit to be officially informed of the Armistice  The 156th Infantry Regiment including Company A, continued fighting until well afternoon of 11-NOV several hours after the official end of World War I.

On 14-NOV Archie Bowman was buried in an isolated grave in or near Pouilly close to where he died on the battlefield.  Three months later, FEB 1919, his mother wrote the U.S. Army requesting a picture of her son’s grave.  Her son’s body would be disinterred and on 28-MAR 1919 reburied in the new Sedan Cemetery in Ardennes in Grave 96, Section 4, Plot 2. By the fall of 1920, Mrs. Bowman initiated a request to have her son repatriated to Hamburg for burial.  Archie’s body was disinterred on 11-JAN 1921 and shipped to America on 27-February.  Escorted by an Army Private, Archie Bowman arrived home on 10:00 AM Sunday, April 10th.

Archie’s body was returned to St. Charles County MO.  It was an option the Army gave to the families of fallen soldiers.  Christina Bowman wanted her son brought home.  Christina wanted Archie to be remembered.  Archie was reburied in a family plot in Thomas Howell Cemetery not far from where he had grown up.  A minister from the Evangelical Church of Hamburg presided.  There was a 15-gun rifle squad to fire a salute.  More than one-hundred men from the American Legion Posts of Augusta, O’Fallon, St. Peters and St. Charles attended.

Christina died in 1939 and was buried next to her husband Jasper and her youngest son Archie.  Melvin died in 1971 and joined his family in the cemetery.  The cemetery is next to Highway 94 in Weldon Springs.  There is a stoplight near the cemetery.  Perhaps you have noticed the small cemetery with a life size statue of a soldier near Francis Howell High School?   Christina didn’t want the world to forget about the farm boy who should have made it through the war. His tombstone reads, “He Gave His All for Democracy.”

According to articles in both the St. Charles Banner News and St. Charles Cosmos-Monitor, Archie was wounded the 12-NOV the day after the Armistice.  According to burial documents in the burial case record, clearly state he was wounded on 10-NOV, declared dead on 11-NOV and buried on 14-NOV.

The next time you drive along Highway 94 past the statue in Howell Cemetery, tip your hat, salute or say thank you to Archie for his sacrifice.

Archie is honored and remembered at the St. Charles County Veterans Museum.