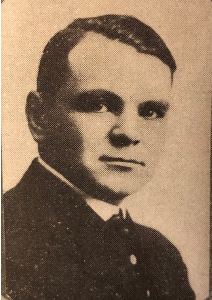 Benjamin Harrison Bloebaum was born 3-JAN-1889.  He lived at 1048 Jefferson Street in St. Charles MO.  Before joining the Army, he was a lawyer.  Benjamin went to University of Illinois in Urbana and was  a senior there in 1914.  His father was William Frederick Bloebaum (a former Postmaster) and mother was Anna Elizabeth Roth.  He had two brothers and one sister.

Benjamin was an acting Sergeant in Company K, 12th Replacement Depot in the US Army.  He was sent to officers training at Fort McArthur Texas.  Benjamin became ill with the Spanish Flu in camp.

Benjamin was admitted to the hospital on 10-OCT 1918 and succumbed to the Spanish flu on 14-OCT 1918.  The Army death certificate from the base Hospital at Camp McArthur Texas (near Waco) says Influenza and broncho pneumonia.  Benjamin was returned to St. Charles and is buried in Oak Grove Cemetery.  Benjamin was 29 years old and single.