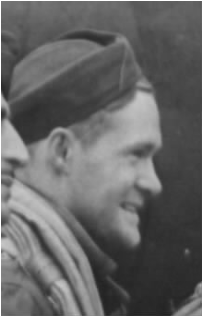 Bernard W. Zimmerman was born about 1921.  His father was Carl F. Zimmerman and his mother was Nettie L. Mennemeier Zimmerman.  He had one sister;  Margaret Pauline Zimmerman Bauer and one brother; Carl F. Zimmerman.  Bernard attended St. Charles High School in the class of 1939.  In 1930 his home was listed as Portege de Sioux MO.   His family lived on a farm near West Alton, MO.

Bernard enlisted out of high school in 1940 in the Army Air Corp.  He served in the 8th Air Force, 323rd Bomber Squadron, 91st Bomber Group, Heavy.   Bernard was among the first American bomber squadron members to be sent to England.

SGT Zimmerman, was a radio operator on B-17 serial number 42-29475 named Stric Nine.  An after action report states:

Six of our ships piloted by Lt.’s Lethers, Bennett, Kethley, Miles and Smith took part on a mission to bomb plane repair shops at Villacoublay.  Poor visibility prevented bombing either target or the hangars on Drome at Caen. Lt. Forsblad’s ship did not return.  Observations were made of his ship leaving formation apparently with four engines going OK, inside the French coast going out. An unidentified plane with two chutes out was seen later land in the sea one-half mile off the French coast at St. Aubin. Enemy fighter attacks were heavy and were directed principally against “B” flight, which was our squadron.

Members of the missing crew were:

Another after action reports states:

Bernard was initially listed as missing in action.  Later, he was officially listed as killed in action, body not recovered on 10-JUL 1943.  Bernard F. Zimmerman was 22 years old.  He is memorialized at Normandy American Cemetery Colleville-sur-Mer, France.  His posthumous medals include: Air Medal and a Purple Heart.

The 91st Bomb Group, known more informally as “The Ragged Irregulars”, flew 340 missions between 7-NOV 1942 and 25-APR 1945 in 9,591 sorties dropping 22,142 tons of bombs. The Group lost 197 aircraft MIA.  The 91st Bomb Group is most noted as the unit in which the bomber Memphis Belle flew, and for having suffered the greatest number of losses of any heavy bomb group in World War II.

During the whole war, 51% of aircrew were killed on operations, 12% were killed or wounded in non-operational accidents and 13% became prisoners of war or evaders. Only 24% survived the war unscathed.

Bernard is honored and remembered at the St. Charles County Veterans Museum.