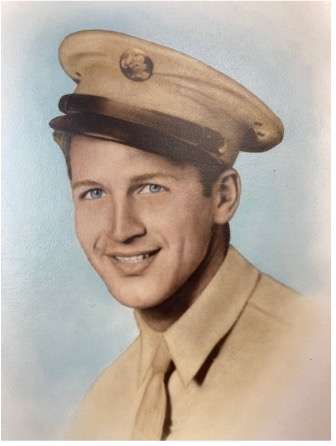 William Howard Browning was born 23-SEP 1919 in Louisville, Kentucky.  He registered for the draft on 16 OCT 1940.  His mother was Nettie Louise Browning.  His father was John W Browning.  He had two sisters: Dorothy and Helen and one brother: Thomas.  William attended Louisville High School and went to Washington State College.  According to his enlistment records, was unemployed.

He enlisted on 7-DEC 1940 at Fort Knox, Kentucky.  He was stationed in Hawaii from February 1941 to May 1943 as a medic serving at Tripler Army Medical Center.  Editor’s Note: Tripler, also known as TAMC, has a long history of healing heroes since before the attacks on Pearl Harbor.

He was awarded the following commendations:

He was discharged on 8-AUG 1945.  William married Elsie S. Scholl (1922-1995) on 10-SEP 1946 in Orange County, California.  William was a resident of California since 1946 and worked for Southern California Gas Company from May 1946 through August 1984 in a supervisory capacity and as aa computer programmer.  It is believed that William Browning has no remaining family.  There is no record of children.

William H. Browning was a Pearl Harbor Survivor and an American Hero.

His medal and commendations were found in the trash a short time ago.  A veteran recovered his shadow box, gave it to the museum and we now honor his memory and legacy at the St. Charles County Veterans Museum.