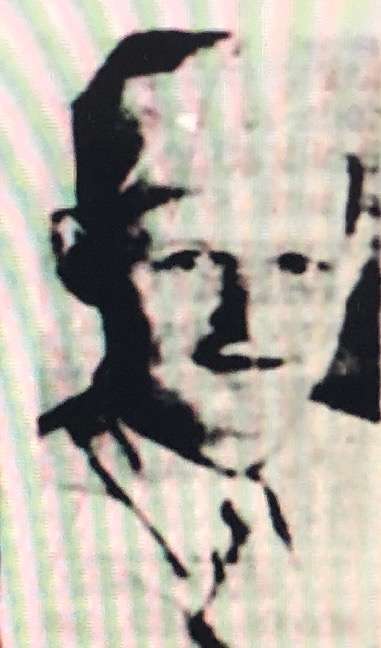 Robert Ellis Butcher was born 7-APR-1918.  His father was Ellis Butcher and his mother was Della.  He had two sisters; Anna and Martha.  Robert married Evelyn Butcher of St Charles MO.  Robert enlisted in the Army 27-MAY-1944 at Jefferson Barracks.  They lived at 910 Nathan Street.  Robert served in 22nd Infantry Regiment, 4th Infantry Division.  He had the rank of Private.  He would serve during the last year of the World War II in Europe.

The regiment assaulted Utah Beach on 6-JUN-1944 starting at H plus 75 minutes.  Robert was still in basic training at the time.  It is likely Robert joined the 22nd Regiment as a replacement in Europe in late August or early September.

The regiment participated in the Cherbourg Peninsula operation from 19-JUL through 2-AUG 1944.  The regiment then headed for Belgium as part of the Operation Cobra moving into Belgium on 6 SEP 1944, entering Germany on 11-SEP-1944.  On 14-SEP the 3rd Battalion broke through the Siegfried Line near Buchet, but neither the regiment nor other formations of the 4th Division were able to exploit a success because of rough terrain lacking good roads, and bad weather hampering air and artillery support.

On 8-NOV PFC Robert Ellis Butcher and the 22nd Infantry moved to an assembly area near Zweifall, Germany, just west of the Hurtgen Forest, and there prepared its plan to attack through the dense woods toward Duren.  On 16 November 1944, the 4th Infantry Division attacked into the Hurtgen Forest as one of the ten divisions participating in Operation Queen, a combined offensive by the First and Ninth U.S. Armies to seize the Rhine River crossings into Germany.  As one of the infantry regiments of the 4th Division, the 22d Infantry spent 18 days in November and early December 1944 in the Hurtgen Forest.

The attack began at 1245 hours on 16-NOV. Although the 22nd made good gains during the first day, it fell short of its initial objectives. Then, as one soldier stated, “all hell broke loose.” During the next two days, every battalion commander was killed or wounded as were many of the small unit leaders. Gains were measured in yards as German artillery pounded the advancing Americans. Mines blocked the muddy roads and the injured had to be hand-carried 1,500 yards back to the Regimental aid station. Tanks and other vehicles could not get forward to help the infantry. German counterattacks supported by armor limited the advance. Some companies were down to 50 effectives and the 2nd Battalion in the south was particularly hard hit.

The attack paused again the next day to clear the rear areas of German infiltrators and to put in a bridge across a stream so that supplies could be moved forward to the beleaguered units. In the early morning of 22-NOV, the 3d Battalion executed a left hook around the German defenses and advanced about 500 yards, cutting the road leading into the village of Grosshau. In the south, the 2nd Battalion was hit by two counterattacks, one tank supported. The American tanks could not get through the thick woods and it was up to the infantry to defeat the attack, but with heavy casualties. The open southern flank was so serious that one company from the 1st Battalion and an ad hoc organization of 100 replacements were sent to hold the line there.

The 23rd and 24th were days of comparable rest, while the regiment refitted and reorganized while waiting for the 12th Infantry to secure the southern flank.

Turkey sandwiches and “luke cold coffee” went forward to the rifle companies of Thanksgiving Day, the 24th. This was the only hot meal to be served to the soldiers of the line during the 18-day battle.

The 22nd Infantry, heavily reinforced by armor, artillery and engineers, launched its attack to seize Grosshau on 25-NOV. The 3rd Battalion again executed a left hook and found its initial move to the forest edge north of Grosshau easy. It then took three hours for the tanks to make their way through the woods and come online with the infantry. By that time, the Germans were waiting.  Six tanks were destroyed in a matter of minutes and the infantry was driven back into the trees by a massive artillery barrage. The 2nd Battalion also made it to the edge of the woods south of Grosshau, but not before sustaining heavy casualties. Nine battalions of artillery, ranging from 105mm to 240mm howitzers, then fired against the village, but to little effect against the German soldiers safely ensconced in the cellars. More leaders in the 22nd fell on this day than on any other day of battle.

By 27-NOV, more than half of the regiment’s soldiers had fallen; almost as many replacements (1,640) had arrived as there were soldiers in the rifle companies at full strength.  The 22nd suffered 2,773 casualties, or 85% of its normal complement of 3,257 soldiers, to take one village and 6,000 yards of forest. Each rifle company went into action averaging 162 soldiers. Days later the rifle companies averaged 87. Even this number required 42% replacements. By the end of the battle, losses of the rifle companies reached an estimated 151% of their original strength.  The terrain and weather negated the impact of American superiority in aviation and armor and made the battle an infantryman’s fight from beginning to end.  Although massive amounts of artillery fire assisted the forward movement of the regiment, the infantry still had to take the ground.

On the morning of the 29th, the 3rd Battalion attacked north and then east around the German defenses in Grosshau, cutting the road leading from the village to the town of Gey, located on the Roer plain. During the 3rd Battalion’s advance, COL Lanham received orders to take Grosshau by direct assault.  Only the company that had been holding the line between the 2nd and 3rd Battalions was in position to make the attack. It was rapidly pinned down with heavy casualties and remained in that predicament for three hours until an American tank force from the south appeared to take some of the pressure off the infantry. The fight for Grosshau continued house- to-house into the night and was finally declared secure just before midnight.

There was no pause after Grosshau.  The 22nd continued its push to the edge of the forest overlooking the Roer plain. Because of the regiment’s weakened state, the 46th Armored Infantry Battalion was attached to seize a line of departure for the 5th Armored Division south of the 2nd Battalion. But it and the 2nd Battalion met extremely heavy fire when they advanced across the open fields. Both made it to the far wood line but had to pull back because there were not enough men to hold the line.

On 1-DEC, the two battalions again attacked under a horrific artillery barrage. The 2nd Battalion was hit by a counterattack and the reserve company was rushed forward to stabilize the line. The fighting strength of the 2nd Battalion was down to 124 soldiers in its three rifle companies, or just about two-thirds of a full-strength company. COL Lanham organized a last-ditch regimental reserve composed of headquarters, service, and anti-tank soldiers, which totaled about 100 men.

Before the regiment could continue the attack the following day, the 3rd Battalion was hit by a German counterattack from Gey and had one of its companies overrun and enemy soldiers penetrate up to the command posts of the 1st and 3rd Battalions. Rather than withdraw, the commander committed his reserve and told his units to “hold on and fight.” The German penetration was shortly wiped out by infantry and tanks. The line was restored. Because of its heavy losses, Major General Raymond O. Barton, the 4th Division commander, requested that the 22nd be relieved “because they had attacked until there was no attack left in them.” The next day, the 330th Infantry, 83d Infantry Division, began relieving the 22d on the line. Just prior to the relief, one of 1st Battalion’s companies was hit by another German attack. It was partially overrun, but the headquarters elements of the three rifle companies, as well as soldiers from the heavy weapons company, closed the breach. Later during the day the German Luftwaffe sortied and about 30 German aircraft bombed and strafed the area, but with few American casualties. The 22nd pulled out of the forest on 3-DEC and headed for Luxembourg. Its battle in the Hurtgen Forest was over.

Robert Ellis Butcher was killed in action on the last day of the battle 3-DEC 1944.  He is buried in Henri-Chapelle American Cemetery in Belgium.  The war department notified his wife Mrs. Marie Butcher.