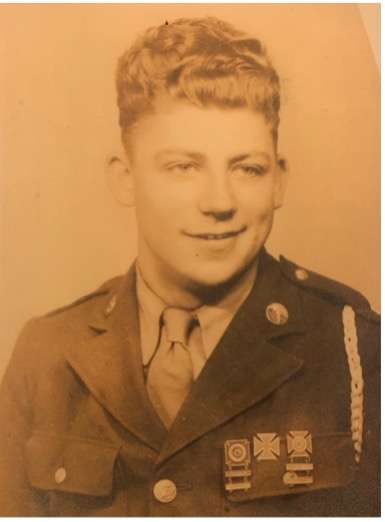 Jesse Edward “Eddie” Callaway was born 23-JAN 1924 in the city of Alton, Madison County, Illinois.  His father was Guy Judson Callaway (1892-1963), and his mother was Ann Elenore “Elsie” Lee Sophie Clowers (1900-1942).  The family later lived in Lincoln County and then St. Charles MO.  The 1930 Federal census lists the family living in St. Charles and the 1940 census lists the family as living in Portege de Sioux MO.  Eddie had three brothers: Roderick, Ray, and Jerold and one sister: Ruby.

Eddie enlisted in the Army at Jefferson Barracks on 9-MAR 1943.   His serial number was 37605273.  The draft card states he had a grammar school education.

He was a Private and served with the 83rd Division, 331st Infantry Regiment in Company I.