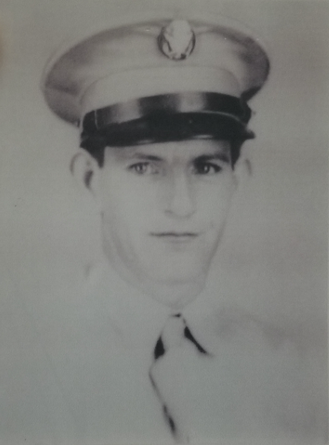 Calvin C. Rottger* was born 24-NOV 1924 and lived at 624 South 4th Street in St. Charles.  Calvin was a dairy worker for St. Charles Dairy. His Parents were Frank Albert Rottger (1899-1968) and Philomena Rottger (1890-1980) and lived in Old Monroe. Calvin had seven siblings.  Four brothers; Marion, Floyd, Everett and Francis and one sister, Viola.  Calvin also had twin sisters that died early in childhood.

Calvin enlisted in the Army 15-AUG 1944.  Calvin left for Europe on New Year’s Day 1-JAN 1945, aboard the Queen Mary from New York bound to Scotland. Calvin would be a replacement after completing basic training.  Shortly after arriving, Calvin, a private was assigned to the 359th Infantry, 90th Division, in General Patton’s 3rd Army.

By now, the 359th was a battle-hardened regiment.  First elements of the division saw action on D-Day, 6-JUN 1944, on Utah Beach, Normandy the remainder entering combat 10-June, cutting across the Merderet River to take Pont l’Abbe in heavy fighting.  During the Battle of the Bulge, the unit withdrew to the west bank on 19-DEC 1944 in a defensive position.  In early January, the 90th  then shifted to the scene of the Ardennes struggle to establish and expand a bridgehead.

It was during this time Calvin C. Rottger was killed in action. Calvin was wounded in action on 6-FEB 1945, the result of a land mine. He died of his wounds two days later, 8-FEB 1945.  Calvin was in Europe and the war for about a month.

Mr. and Mrs. Frank Roettger of Chain of Rocks (Village in Lincoln County off Cuivre River) were informed that their son, Private C. Calvin Roettger, was killed in action 8-FEB-1945 in Luxembourg.  Private Clarence S. Sachs, a friend of Calvin’s also in the 3rd Army, was wounded at the battlefront on 8-FEB-1945.  According to his parents in Flint Hill, Private Sachs told his parents that his buddy Calvin Roettger who was fighting by his side, was killed at the same time he was wounded (Reported by the Wentzville Union Newspaper on 23-FEB-1945).

Calvin’s body was returned home and is buried at Josephville Catholic Church Cemetery in Josephville MO (West of O’Fallon, near Wentzville) in St Charles County.

*Note: Both Calvin and his father have name spelled Rottger and Roettger on some official documents.