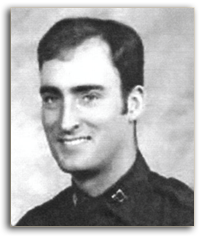 Captain Robert John Morris Jr was born on July 24, 1945.  Robert lived in St Charles in St Charles County.  He enlisted in the Air Force in 1967.  Robert served during the Vietnam War. He began his tour on December 26, 1972*. He was a pilot with the rank of Captain and served with 716th Bomber Squadron, 307th Bomber Wing.

LaBeau, Vavroch, Hudson and Cook spent the next six weeks in the Hanoi prison system.  Hanoi denied any knowledge of the pilot, Robert J. Morris or his crew member, Captain Nutter J. Wimbrow, Jr.  For almost 5 years, the families of Captain Morris and Wimbrow awaited news of the fate of their loved one.  Ultimately, LaBeau, Vavroch, Hudson and Cook were released in Operation Homecoming on February 12, 1973.  Captain Robert Morris Jr. was declared dead on December 26, 1972.  In late September 1977, the Vietnamese discovered the remains of Morris and Wimbrow and returned them to U.S. control.

Robert was the only pilot killed in action from Missouri during Vietnam.  During the month of December 1972, 62 crewmembers of B52 aircraft were shot down and captured or went missing. Of these 62, 33 men were released in 1973. The others remained missing at the end of the war. Over half of these survived to eject safely. Robert’s body was not recovered until 1977.  Robert is buried in Jefferson Barracks National Cemetery in St. Louis Missouri.

A B-52 static display was dedicated to Captain Morris and the crew of Ebony-02 who flew during Operation Linebacker II during the Vietnam War at Whiteman Air Force Base in July 2009.  The results of the operation represented a decisive moment of the war.  Negotiations with the North Vietnamese resumed in January 1973.

Robert John Morris Jr is honored and will always be remembered in the St. Charles County Veterans Museum.  A dog tag with his name hangs on the Wall of Honor at the museum.
No one is ever gone as long as someone has memories of them.
*Research shows his tour began on the same day his B52 was shot down.