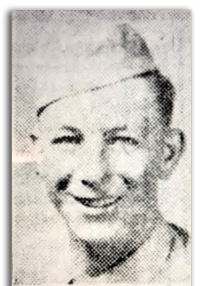 SGT Barebo was an infantryman in the 78th Division, 310th Infantry Regiment.  Shortly after the Battle of the Bulge, Allied forces began counterattacks driving into Germany.  The 78th had held the area it had taken from the Siegfried Line against the violent German attacks throughout the winter.

The Division attacked, 30-JAN-1945, and took Kesternich, 2-FEB-1945.  It is during these attacks into Germany on 3-FEB-1945 Sgt Champion C. Barebo was killed in action.  Sgt. Barebo was only 20 years of age.  His body was temporarily interred at a military cemetery in Margarten, Holland.

A local paper – The Daily COSMOS-Monitor reported Wednesday, 13-APR 1949, on the Front Page;  “The remains of Sergeant Champion C. Barebo, killed in the service of his country at Konzen, Germany, 3-FEB 1945, will be returned to St. Charles tomorrow at 8 a.m. aboard the Wabash Railroad.” Four year after Barebo had been killed, he came home.

The Daily Cosmos-Monitor reported in February 1945, the sergeant was the 50th St. Charles boy to make the supreme sacrifice in the war.