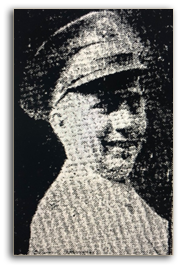 Clarence enlisted in the Army on 28-NOV-1942 at Jefferson Barracks, went to Camp Phillips (in Salina County Kansas) for training and served during World War II in Italy.  He was a Private First Class in the 34th Infantry Division (The Red Bull Division) 168 Infantry Regiment.

On 24-JAN-1944, during the First Battle of Monte Cassino the 34th pushed across the Gari River into the hills behind and attacked Monastery Hill which dominated the town of Monte Cassino. The division attempted to storm the ancient abbey itself, but the Germans defied all attempts to wrest control of it.

While they nearly captured the objective, in the end their attacks on the monastery and the town failed.  The performance of the 34th Infantry Division in the mountains has been called one of the finest feats of arms carried out by any soldiers during the war.  The unit sustained losses of about 80 per cent in the infantry battalions.  It is during these battles, Clarence was initially reported wounded.  On June 26th his wife received word he was missing in action.  It was later confirmed he was killed in action on 11-FEB-1944 near Monte Cassino Italy.

The 34th Infantry Division was relieved from their positions by 13-FEB-1944.  In the brutal winter fighting of 1943-44, the Red Bull lost thousands of its men.  Eventually, it took the combined force of five Allied infantry divisions to finish what the 34th nearly accomplished on its own.