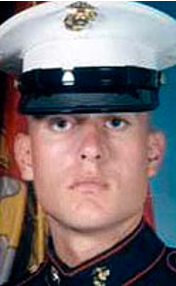 Matthew William Clark was born 11-AUG-1984.  He lived in St. Louis County MO.  His father was Kenneth Clark, a Marine veteran who died during Matthew’s senior year of high school.  Matt’s mother was Lee R. Hundelt.  Matt graduated from Ladue High School in 2002.  Matt attended the University of Missouri St. Louis for two years after graduating and then enlisted in the Marines and reported to Marine Corps Recruit Depot San Diego on 17-MAY 2004.  He then went to Infantry Training Battalion, School of Infantry West on August 17, 2004, where he earned the MOS 0311, Marine Basic Rifleman. He then reported to Kanehoe Bay, Hawaii on 27-OCT 2004.

Matt was assigned to the 3rd Marine Division, 3rd Marine Regiment 2nd Battalion at Kaneohe Bay, Hawaii. He was a mortar man.  His mother, Lee Hundelt, said her son had wanted to be a Marine since he was a boy.  She recalled a time when Matthew wanted to hang an American flag over his bed but was too young to do it himself.  Lee hung it for him instead.

He returned from a tour of duty in Afghanistan in support of Operation Enduring Freedom in JAN 2006. After a short time back in Hawaii, LCpl Clark then deployed to Iraq in support of Operation Iraqi Freedom.  Matthew William Clark was killed by a roadside bomb 14-DEC 2006 in Anbar province Iraq while driving an armored Humvee serving during Operation Iraqi Freedom.  He was 22 years old.  On the night he deployed, Matt called his mom and told her, “He did not want to die, but he was not afraid to die.”

Marine Lance Cpl. Matt Clark thought about his mother when he filled out his emergency contact form before leaving for Iraq.  Matthew called St. Charles County home during his last two years in service.  He wrote that he wanted his priest present if his mother had to hear the news dreaded by every parent of a child in the service.  On 14-DEC 2006, a Thursday night, Msgr. Vernon Gardin – his priest – accompanied three Marines to break the news that Clark was not coming home.

One of his teachers remarked, “He was always thinking about other people more than himself.”  A month before his death, the Marine emailed his priest a personal manifesto of his life.  “I am American,” Clark wrote. These are my people. I will always be more like them than the Britons or French men. I will forever desire to protect them.”

Matthew was preceded in death by his father Kenneth B. Clark, a Marine veteran.  Matthew and his father were very close.   “Few fathers and sons are as close as Ken and Matthew were,” said The Rev. Monsignor Vernon Gardin, Pastor of Immaculata Church in Richmond Heights. “Ken doted on Matthew and, when he was dying, Matthew was his angel.”  Matt is survived by his mother, Lee Hundelt and her husband Craig.  He had a step-sister, Elizabeth Hundelt and step-brother, Miguel Hundelt.

A two-year effort to memorialize Matthew Willian Clark came to fruition Saturday, 13-APR 2013 with the dedication of a highway marker along Highway 270 honoring the Lance Corporal.