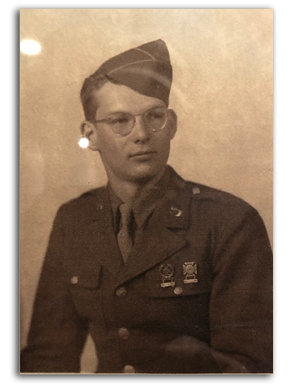 CPL. Roland (Bo) Sturhahn served 1944-1946 in the U.S. Army 2nd Division, 706 Tank Battalion during World War II.  Bo was stationed in the Philippines.  Before Bo was drafted he was fascinated by military history.  Bo clipped and kept articles from the St. Louis Newspapers about the war and started a scrapbook.  When he got home, he discovered his father continued to clip the articles for his scrapbook while he was overseas.  Bo’s collection includes all theaters of the war.  This unique collection of original newspaper photos and reports offers rare views and the progression of the war as reported to the folks back home.

Roland and his wife Sue often visit the museum today to see the exhibit. Ralph Barrale our founder was committed to recognizing the Merchant Marines for delivering the goods and Bo’s newspaper collection tells their story.

More about the Merchant Marine
The Merchant Marine was never designed for front-line combat on the battlefield or on the ocean. It was made up of mostly civilian members who conduct almost any type of maritime trade in peacetime, from fishing tours to oil shipping. During a war, the federal government can make these sailors into an auxiliary of the U.S. Navy.  During World War II, these men went through light training before crewing ships that had to brave not only the seas and storms, but German U-boats that were organized into wolfpacks and ordered to hunt the Merchant Marine.
This forced these men into the worst of the fighting, despite their largely non-combat role.

German U-boats patrolled the American coasts, sinking ships — sometimes within view of their ports just off the United States coasts.  Whenever possible, German U-boats operated on the surface, drawing oxygen to run their diesel motors and attacking with deck guns that could punch holes in ships’ hulls and doom them. When that was too dangerous, they would hunt underwater and attack with torpedoes.

For the sailors of the Merchant Marine, this was terrifying. They were under threat of German attack from the moment they left the range of the shore guns until they reached European ports. American waters were actually some of the most dangerous as U-boats hunted the coast at night, looking for U.S. ship silhouettes blocking out lights from shore. Once they had the target, the subs could attack and disappear.

Several of Bo’s headlines hang in the museum today.