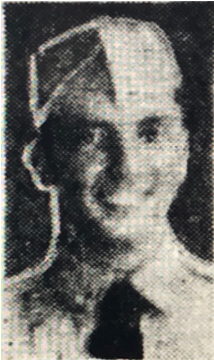 Joseph E. Crawford was born 8-6-1933. His parents were Mr. George E. Crawford (1895-1973) and Mrs. Antonia “Anna” Crawford (1900-2000) of Route 94 in West Alton. Joseph had four brothers; John, George William, and Frank.  Joseph worked on the family farm until he enlisted in the Army in 12-APR 1951.  He was a Private E2, Light weapons Specialist in the 31st Infantry Regiment, 7th Infantry Division. The 31st Infantry was nicknamed the Polar Bears. He arrived in Korea in mid-September. He was killed in front line fighting 28-SEP 1951 after only 11 days in the country.  He was eighteen years old.

His parents lost two sons within a month.  His brother PFC George Edwin Crawford Jr. was killed in an automobile accident on August 2nd while returning to Ft Leonard Wood where he was stationed. He had been home on a weekend furlough. George had returned from Korea on June 21st.

Joseph is remembered at the Korean War Veterans Memorial in Washington.  Joseph E. Crawford is buried in St Joseph’s Cemetery in Alton, IL.

Joseph is honored and remembered at the St. Charles County Veterans Museum.