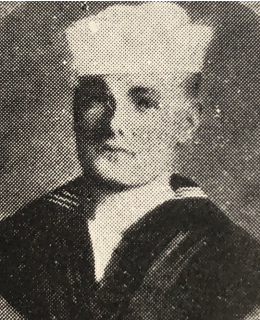 Aloysius Henry Crockwell was born 11-JAN 1896 in Raymond IL.  Aloysius, mother was Lou Crockwell (1871-unknown).  His father was Thomas Peters.  They had two sons; Gohn and Aloysius.  Aloysius lived in East Alton will working for Standard Oil Company in Wood River IL.  He later lived in St. Peters Missouri while working at the Sacred Heart Academy in St. Charles.  Aloysius was in the United States Navy, Petty Officer Third Class. He enlisted 20-JUN 1917.  Aloysius Crockwell was assigned to the USS Ticonderoga.

The USS Ticonderoga, was a 5130 gross ton cargo ship and animal transport, was built at Bremerhaven, Germany in 1914 as the German flag merchant steamer Kamilla Rickmers. The ship was seized by the U.S. Government in 1917 and renamed Ticonderoga.   Later in that year, the Ticonderoga was turned over to the Navy under charter and placed in commission in early January 1918.  Later that month she loaded cargo and, during February and March, made her initial voyage to France and back. Two more round-trips followed in May/June and July/September 1918.  On 27-AUG 1918, while homeward bound, she was unsuccessfully attacked by German submarine gunfire.

Ticonderoga left New York for her fourth trip to France on 22-SEP 1918, but experienced machinery problems that caused her to drop behind her convoy during the night of 29-30 September.  At about 5:45 AM on the 30th, a submarine was spotted ahead.  As the ship’s gun crews prepared for action, her Commanding Officer, Lieutenant Commander James J. Madison, tried to ram the enemy, but narrowly missed.  Aloysius Crockwell was a member of the forward gun crew.

The submarine, was German, a large and heavily-armed cruiser submarine hull number U-152.  The submarine opened fire and hit Ticonderoga setting her ablaze.  The shelling killed several men, temporarily disabling her helm and knocking out her forward gun.  Aloysius likely was injured or killed at this time.   With her radio wrecked, she was unable to call for help and had to continue the contest unsupported. Though badly wounded, Lt Cmdr. Madison regained his position on the bridge, got the ship under control and turned so her after gun, a six-inch, could bear on the enemy.

U-152 submerged, then returned to the surface and resumed the battle. Once Ticonderoga’s after gun was put out of commission, she was relentlessly pounded by exploding shells from the submarine’s two 15cm (5.9-inch) deck guns. At this point, casualties among Ticonderoga’s crew and passengers were very heavy.

The Ticonderoga now unable to steer and incapable of fighting back was now helpless. U-152 took position off the American ship’s starboard beam and fired a torpedo that hit just aft of her engine room. Ticonderoga began to sink.  Most of her lifeboats were full of holes and others swamped on launching, leaving only one boat and a raft for her survivors. As the ship was being abandoned under a white flag, the submarine continued to fire, killing and wounding even more men.  At 07:45, Ticonderoga slipped beneath the sea.

Of the 237 sailors and soldiers who embarked, only 24 survived. Twenty-two of those survivors were in one lifeboat and were picked up by the British steamer SS Moorish Prince four days later. The other two, the executive officer and the first assistant engineer, were taken prisoner on board the U-boat and eventually landed at Kiel, Germany, when U-152 completed her cruise.

The dead included 112 U.S. Sailors including Aloysius Crockwell and 101 Soldiers.

From the Post-Dispatch 12-OCT 1918: “One of the four Missourians who lost their lives in the sinking of the ship was Aloysius Crockwell, 23 of St. Peters who enlisted a year ago and made four trips across the Atlantic. He was a member of the forward gun crew.  He was home on furlough a month ago.  Prior to his enlistment he was employed at the Sacred Heart Academy in St. Charles.” The Post-Dispatch reported on 12-OCT 1918, “Aloysius was reported missing.  Two officers were taken prisoner.  Three officers and five enlisted men were announced as the only known survivors of the Ticonderoga by the Navy Department.  The ship was torpedoed when because of engine trouble she fell beyond her convoy.  10 officers and 102 enlisted men were lost.

One other St. Louisan lost his life on the Ticonderoga.  John S. Van Horn, 19 years old of 4028 North Taylor Avenue in St. Louis.

Aloysius body was never recovered.  He is memorialized at Suresnes American Cemetery and Memorial in France.

Aloysius Crockwell is honored and remembered at the St. Charles County Veterans Museum.