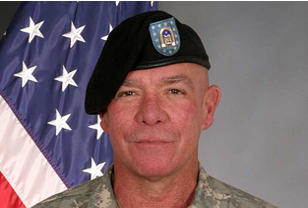 Honoring Those Who Died While Serving Our Country 10-SEP 2008.

Daniel Riley Sexton was born 16-FEB 1955.  His mother was Norma Josephine Cave (1926-2008).  His father was Riley Sexton (1918-2002).  Dan was raised in Wentzville, Missouri. He graduated from Wentzville High School and attended several colleges in Missouri while working in the family’s restaurant business.

Dan met his future wife Victoria (Tori) in 1991 while he was on leave in New Hampshire after Operation Desert Shield/Desert Storm.  For the next 10 years, they moved to wherever the Army sent them until they landed in Alaska.  Tori later said, “Dan regretted not going into the military during the Vietnam War.  He told me he felt guilty about missing Vietnam.”  He could always be seen riding his bicycle to wherever he needed to go and would usually run a few miles to warm up before reporting for P.T.

Daniel Riley Sexton died 10-SEP 2008 at the Joint Base in Balad of injuries sustained in a non-combat accidental shooting.  He was 53.  Dan was awarded a Bronze star.  Dan was an active member of the Catholic Church, attending Mass on deployment whenever it was available.  His soldiers knew not to disturb him when he was reading his daily Bible passages.  He was a member of the Knights of Columbus and the VFW.

Daniel Sexton had three children.  A daughter, Shannon died at birth.  He had two sons; Shane and Corey. Dan was also a father figure to many of the younger soldiers in his company and they would often confide in him.  He is buried at Arlington National Cemetery.