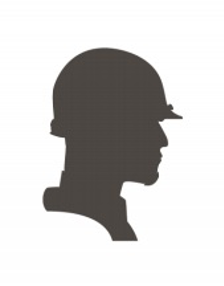 Allen A Dierker was born 27-MAR 1906 in O’Fallon MO in St. Charles County. His parents were Edward Dierker (1870-1970), who is buried at Sage Chapel Cemetery in O’Fallon MO. His mother was Betty Williams Dierker (1876-1958). Allen had seven brothers; Walter, Frank, John, Edward, Louis, Jule and Claud. He had four sisters; Annie, Ora, Allice and Ethel. When he registered for the draft, he was 37 years old and employed at the O’Fallon Rock Quarry. He was married to Sadie C. Dierker. His home in 1940 was Dardenne St. in Saint Charles, MO.

According to the hospital admission card file, he sustained severe injuries to his head when struck by a Jeep. He was injured and admitted to the hospital in November or December 1943 and lingered until 16-JAN 1944. Allen is buried in Carthage, Tunis, Tunisia in North Africa American Cemetery and Memorial.