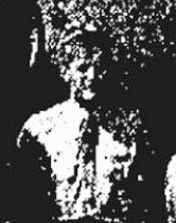 Douglas Martin Fulkerson was born in Defiance MO 16-JUN 1919.  He worked in Jackson MO.  His father was Roy Martin Fulkerson (1881-1953) and his mother was Elizabeth Susan Weyrauch (1890-1938).  He had one brother;  Mason and one sister; Clara.  Douglas Fulkerson had completed 4 years of high school. He enlisted in Pleasanton Kansas 23-Dec 1940.  He had the rank of Staff Sergeant while serving with the 92nd Bomber Group,  Heavy, 407th Bomber Squadron.  Douglas Fulkerson was a staff sergeant, radio Operator gunner

The 92d was transferred to RAF Alconbury where it was reformed as an operational combat group. At Alconbury the group took the name “Fame’s Favorite Few”, and its B-17s acquired the tail code of “Triangle B”. The Group resumed operational flying missions on 1-MAY 1943. From Alconbury, the 92d engaged in bombing strategic targets, including shipyards at Kiel, ball-bearing plants at Schweinfurt, submarine installations at Wilhelmshaven, a tire plant at Hanover, airfields near Paris, an aircraft factory at Nantes, and a magnesium mine and reducing plant in Norway.

In September 1943, the 92d BG was moved to RAF (Royal Air Force) Podington, near Wellingborough in Bedfordshire.  From Podington, the group flew almost 300 operational missions over Nazi-Occupied Europe. Although handicapped by weather conditions, enemy fire, and insufficient fighter protection, the 92d bombed aircraft factories in central Germany on 11 January 1944 and received a Distinguished Unit Citation for the mission.  The group took part in the intensive campaign of heavy bombers against the German aircraft industry during Big Week, 20–25 February 1944. After that, it attacked V-weapon sites in France; airfields in France, Germany, and the Low Countries, and industrial targets in France, Germany, and Belgium, making concentrated strikes on oil and transportation facilities.