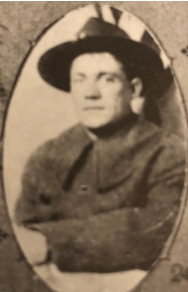 Earl was mustered into the Army 27-JUN 1916 in Nevada Missouri and served in the 35th Infantry Division, 130th Machine Gun Battalion.  In April, after over seven months of hard drilling, the division began to move.   Earl departed Hoboken NJ, 29-MAR 1918 aboard the Troop Ship Mt. Vernon.  The 35th Division arrived at Le Havre, France, on 11-May 1918. The 35th served first, a brigade at a time, in the Vosges mountains between 30 June and 13 August.  It was during the time Earl was stationed in the Vosges Mountains.  Earl was killed in action on 16-JUL 1918. Earl B. Gardner is buried at Meuse-Argonne American Cemetery and Memorial in France.

Earl B. Gardner is honored and remembered at the St. Charles County Veterans Museum.