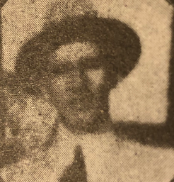 Earl Bennett Williams was born 10-MAY 1893.  He lived in Wentzville.  He was employed as the assistant postmaster.  His father was James Williams (1848-1902) and his mother was Isabelle Edgar Oney Williams (1853-1921).  Earl had four brothers; Jessie, William, Carl and James and three sisters; Martha, Sallie and Fannie.  He entered the service 5-OCT 1917 and was assigned to 354th Infantry Company I then transferred to 38th Infantry Company.  Earl departed Hoboken NJ for France, 29-MAR 1918 aboard the troop ship Mount Vernon.

Earl B. Williams served during World War I at the Battle of Chateau-Thierry.  The Battle of Château-Thierry was fought on 31-MAY 1918 and was one of the first actions of the American Expeditionary Forces (AEF) under General John J. “Black Jack” Pershing.

It was a battle in World War I as part of the Second Battle of the Marne, initially prompted by a German Spring Offensive. German and local actions at Château-Thierry recommenced on 31 May to 22 July 1918, against the American Expeditionary Forces, consisting of troops from both the United States Army and Marine Corps units.

The 38th Infantry Regiment repelled the German attack near Mézy, France, across the Marne River in July 1918. This defense checked the Germans’ assault and made an Allied offensive possible, thus earning 3rd Infantry Division’s nickname “Rock of the Marne.” These units were the newest troops on the front in France and just barely out of training.

Earl B. Williams is honored and remembered at the St. Charles County Veterans Museum.