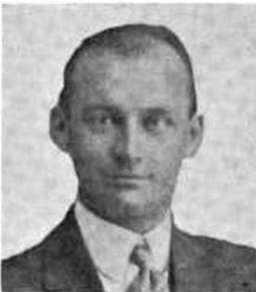 According to his draft registration, he was a Journeyman plumber working in Detroit MI.  Entered service 29-APR 1918, Ft. Wayne, Ind., and was sent to Camp Funston (would become Fort Riley Kansas), Kansas.

The Meuse-Argonne offensive was a major part of the final Allied offensive of World War I that stretched along the entire Western Front. It was fought from 26-SEP 1918, until the Armistice of 11-NOV 1918, a total of 47 days. The Meuse–Argonne offensive was the largest in United States military history, involving 1.2 million American soldiers. It is the second deadliest battle in American history, resulting in over 350,000 casualties including 28,000 German lives, 26,277 American lives and an unknown number of French lives.

Edwin Echelmeier died of wounds 4-NOV 1918 just seven days before the Armistice from wounds received in action during the Meuse-Argonne Offensive.

His burial details are unknown, categorized as lost in war.  Edwin Echelmeier is honored and remembered at the St. Charles County Veterans Museum.