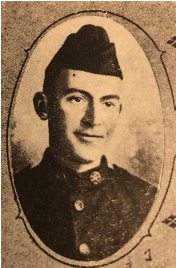 Honoring Those Who Died While Serving Our Country 13-May 1919

Edward left New York on the Troop Ship Olympic for France on 9-Aug-1918.  He was a Private in Headquarters Company 349th Infantry.  The 349th Infantry Regiment was constituted on 5 AUG 1917 and was assigned to the 88th Infantry Division. The regiment trained for combat in World War I and arrived in France in late 1918. The 349th saw minor combat in Alsace just before the war ended (11-NOV 1918).  The 88th Division as a whole suffered only 78 total casualties.

Edward became ill with the Spanish Flu.  More U.S. soldiers died from the 1918 flu than were killed in battle during the war. Forty percent of the U.S. Navy was hit with the flu, while 36 percent of the Army became ill, and troops moving around the world in crowded ships and trains helped to spread the killer virus. At the time, there were no effective drugs or vaccines to treat this killer flu strain. Citizens were ordered to wear masks, schools, theaters and businesses were shuttered and bodies piled up in makeshift morgues before the virus ended its deadly global march.

Edward though ill, left France on the hospital ship Mercy 12-MAY 1919 and died onboard ship 13-May 1919.   The Hospital ship arrived 25-MAY 1919 in New York.  Edward’s body was returned to St. Charles where he is buried in St Peter Cemetery on 1st Capitol.  An official document reported Edward was sick and wounded.

If you have additional information about Edward, please contact the museum.

Edward is honored and remembered at the St. Charles County Veterans Museum.