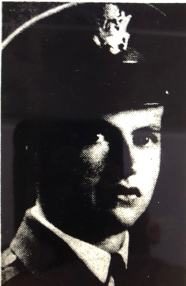 Edward J Tighe Jr. was born in 8-OCT 1919.  He was from Defiance and the Weldon Springs area. Edward was the son of Mr. and Mrs. John W. Tighe.  Edward had graduated with honors from Augusta High School.  He attended college for two years in Lebanon before taking up aviation in Texas.  Edward’s father was employed at the Atlas TNT plant in Weldon Springs. Before enlisting Edward, had a semiskilled occupation in manufacture of automobiles.  He enlisted 12-OCT 1940.  He was an aviation cadet, and attended advanced pilot class 41-D, at Brooks Field, Texas. He was with the Army Air Corp assigned to 47th Pursuit Squadron, 15th Pursuit Group, 7th Air Force at Wheeler Field on Oahu, Hawaii.  He was a second lieutenant at Wheeler Field when the war started.  His group was hit hard during the Japanese attack on Pearl Harbor but did manage to get some pilots in the air and claimed a number of victories.  Much of the group remained as part of the Hawaiian defense but a number of squadrons were moved to the Central or South Pacific.

Mr. Tighe said the last letter received from his son was dated 17-MARCH was from Wheeler Field, Honolulu. Sometime in late March, he was assigned to the Pacific where he was killed in action 30-MAR 1942. From St. Louis Globe Democrat on 10-APR 1942. “Edward Tighe 22, a pilot in the Army Air Corp and the son of Mr. and Mrs. John W. Tighe of Weldon Springs, MO. has been killed in action in the Pacific war zone according to the telegram received yesterday by the parents from the War Department.  The wire contained no details of how Tighe met his death.

Edward is honored and remembered at the St. Charles County Veterans Museum.