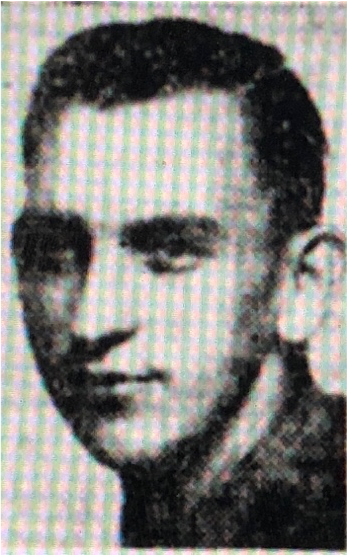 Edward L. Griffith was born 29-MAY 1920 in St Charles MO. He worked as a shoemaker before enlisting on 21-JUN 1944 at Jefferson Barracks.  His mother was Mrs. Beulah S. Griffith who lived at 115 Boones Lick Rd.  He lived with his wife Mrs. Virginia Griffith and two children at 713 North 7th Street.  Virginia worked as a waitress.  He was a private in the Army serving in the 60th Infantry Regiment, 9th Infantry Division.

In June of 1944, the 60th Infantry debarked at Utah Beach in Normandy, France. On 12 JUN, driving hard toward the St. Colombe in France, the 2nd Battalion, 60th Infantry completely outdistanced the rest of the 9th Division. For a time, the 60th Regiment was believed to be lost.  Actually, its 2nd Battalion had overrun the German defenses in the face of murderous fire and had cut the main highway to the northwest.  After the bitter and bloody struggle in the Huertegen Forest, the 60th Infantry fell back to the Monschau area where its efforts won it a third Presidential Unit Citation in the snow and bitter cold of the Battle of the Bulge.

After their breakout from the Battle of the Bulge, while marching toward Germany, Edward L. Griffith was captured and later died while a prisoner or while attempting to escape on31-MAR 1945.

From Post-Dispatch published on 3-MAR 1945:  “Edward has been missing in action since 6-Jan 1945.”  Later, the Globe Democrat published on 31-OCT 1945, “Edward died while being held prisoner by Germans on 31-MAR 1945.”  The official report says Edward was a POW at Stalag 4B Muhlberg Sachsen 51-13.  The report says, Edward was “executed or shot while trying to escape.”  Surviving are his mother Beulah S. Cline (we believe she remarried) of St. Charles.

If you have any information or pictures of Edward, please contact us.