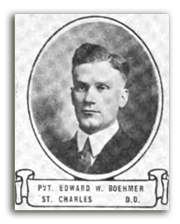 Edward was a Private in the American Expeditionary Forces in World War I.  Edward was born on 5-26-1893 and lived at 558 Madison Street in St. Charles.  He was single when he enlisted and was a shoemaker employed by International Shoe Company in St. Louis.

Edward was in Company H, 356th Infantry, 89th Division.  He departed New York for Europe on 6-4-1918 aboard the troop ship RMS Coronia a British ocean liner.

Edward W. Boehmer died 12-29-1918.  During our research we found discrepancies in the recordkeeping pertaining to recorded cause of death.  Records stated, killed in action, died of disease, and died of pneumonia.  In a seemingly official record we found a notification stating:

Edward W. Boehmer died serving his country.  His remains was returned to St. Charles.  He is buried alongside his father Frederick Boehmer and mother Fredericka Boehmer in the Zion Lutheran Church Cemetery in Harvester Missouri.

American losses in World War I were modest compared to those of other belligerents, with 116,516 deaths and approximately 320,000 sick and wounded of the 4.7 million men who served. The USA lost more personnel to disease (63,114) than to combat (53,402), largely due to the influenza epidemic of 1918.

We honor and remember Edward at the St. Charles County Veterans Museum.