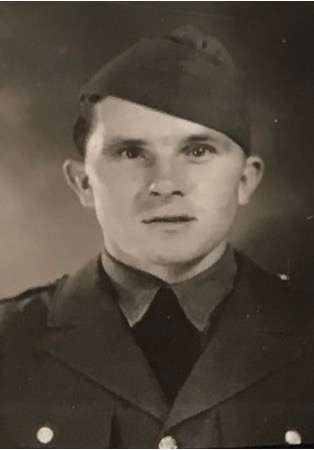 Ernest John Gerdts was born 15-MAR 1918 in Kearny Nebraska. He later moved to Portage de Sioux in 1935.  His father was Henry C. Gerdts and his mother was Marie Helena E. Willoper Gerdts.  He had five brothers, Arthur, Waldo, Henry, Frederick and Robert.  Ernest was self-employed working in Portage de Sioux.  Ernest registered for the draft 16-OCT 1940.

Ernest served as a Corporal in the Army during World War II in the 193rdTank Battalion. The Battle of Okinawa was the last major battle of World War II, and one of the bloodiest.

On 1-APR 1945 – Easter Sunday – the Navy’s Fifth Fleet and more than 180,000 U.S. Army and U.S. Marine Corps troops descended on the Pacific island of Okinawa in the final push towards Japan. The invasion was part of Operation Iceberg, a complex plan to invade and occupy the Ryukyu Islands, including Okinawa.  The Battle of Okinawa was a stalemate for a long time.

While the 6th Marine Division cleared northern Okinawa, the US Army 96th and 7th Infantry Divisions wheeled south across the narrow waist of Okinawa. The 96th Infantry Division encountered fierce resistance in west-central Okinawa from Japanese troops holding fortified positions.  The Japanese had prepared their positions hiding in fortified caves and fought tenaciously.

The next American objective was Kakazu Ridge.  The 27th Infantry Division made a preliminary attack on the night of the 18-APR as bridges were secretly built across the Machinato Inlet on the west coast.  The main attack was launched at 06:40 on 19-APR after an opening barrage by twenty-seven artillery battalions with naval gunfire and aircraft attacked the Japanese rear area.

The 27th continued to hold its ground on the south side of the Machinato Inlet and made some gains but failed in its assault on Kakazu Ridge when the 193rd Tank Battalion became separated.  The 193rd, supporting the 27th Division, suffered extremely from a lack of tank-infantry coordination during the attack. Of thirty U.S. Army tanks, three were stopped by mines or road hazards and five were shot by Japanese anti-tank guns enroute to the village objective.  In the village, fourteen more tanks were disabled by mines, anti-tank guns, artillery, and close assault units.  Six more tanks were attacked by suicide attackers who swarmed the unprotected tanks and destroyed them with satchel charges.

At 1330, the tanks withdrew. Only eight vehicles of the original thirty made it back to the start point. The tanks had operated wholly without infantry support.  By day’s end Army losses were 22 tanks, 720 killed, wounded, and missing. Many of the tanks were completely destroyed wrecked by mines, internal explosions, and US artillery brought down on them.

It was during this battle, Ernest John Gerdts was killed in action 19-APR 1945.

On 26-APR, an American attack on the Maeda Escarpment (located atop a 400-foot vertical cliff), also known as Hacksaw Ridge, began.  To defend the escarpment, Japanese troops hunkered down in a network of caves and dugouts. They were determined to hold the ridge and decimated some American platoons until just a few men remained.  Much of the fighting was hand-to-hand and particularly ruthless. The Americans finally took Hacksaw Ridge on 6-MAY.

The Battle of Okinawa would last until 22-JUN 1945.  Both sides suffered enormous losses.

The Americans suffered over 49,000 casualties including 12,520 killed.  Japanese losses were even greater; about 110,000 Japanese soldiers lost their lives.  It’s estimated between 40,000 and 150,000 Okinawa citizens were also killed.

Ernest John Gerdts body was never recovered and remains missing in action.   He was ultimately declared dead and is listed as FOD (finding of death), body not recovered.  He was posthumously awarded a Purple Heart according to American Battle Monuments Commission.  He is memorialized in Honolulu Hawaii.

Ernest is honored and remembered at the St. Charles County Veterans Museum.