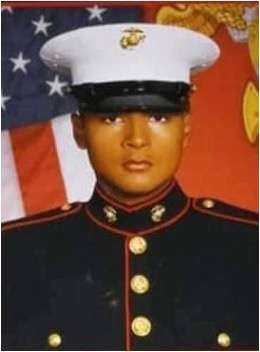 Lance Cpl. David L. Espinoza was born 10-JUL 2001 in Laredo, Texas, and raised in Rio Bravo, Texas, his hometown.  His parents are Elizabeth Holguin and Victor Manuel Dominguez Sr.  His siblings are Angel, Victor, and Delilah.

He attended Lyndon B. Johnson High School, graduating in the summer of 2019.  Immediately after graduating, he joined the Marines and reported to Marine Corps Recruit Depot in San Diego, California for basic training. Lance Corporal Espinoza then went to the school of Infantry at Camp Pendleton.  Most recently, he received his orders to Afghanistan for the withdrawal of the US forces after a 20 year-long conflict.

His parents recalled. “As a toddler, he always wanted to play with his plastic soldiers, envisioning different scenarios.  No matter how many years have passed since then, he always told everyone that knew him that he was going to become a U.S. Marine.

David never once complained about his assignment, rather, took it to heart to give back to those whom he was sent to protect.  He died after a suicide bomber detonated explosives outside Kabul’s Hamid Karzai International Airport Kabul, Afghanistan. 26-AUG 2021 in Kabul, Afghanistan.  He was 20.