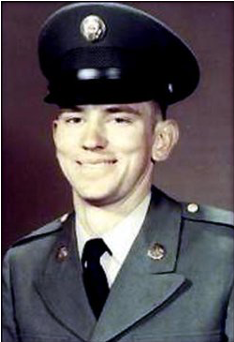 Eugene Frederick Poeling was born 19-FEB 1946 in Alton IL.  He was the son of Peter Poeling and Nettie E. Erb Poeling of Worden IL.  Eugene later lived on the family farm in Portage de Sioux – now the site of the power plant – until 1961.  The Poeling’s were long-time residents of Portage de Sioux in St. Charles County MO.  Eugene then moved with his parents to Hamel IL.  Eugene was a 1964 graduate of Edwardsville High School.

Eugene was the youngest of four children.  He had two brothers; Paul and Bernard, and a sister Mary Lou.  Eugene worked for Owens Illinois Glass Company before entering the service.  He entered military service 28-OCT 1966 and received his basic training at Ft. Lewis WA. and Ft. Polk LA.   Eugene was home on leave from 17-MAR to 6-APR before reporting to Vietnam.

He started his Vietnam tour 10-APR 1967.  Eugene served with 4th Infantry Division, 8th Infantry Regiment, 1st Battalion, B Company.  He had the rank of Private First Class.  Eugene’s specialty was Light Weapons Infantry.  Early on 20-MAY 1967, Co. B trailed Co. A and C in a clearing operation.  Throughout the rest of the day the companies would skirmish with the North Vietnamese Army (NVA) and come under mortar fire.  Shortly after the battalion’s defensive perimeter was established, it was hit by intense mortar fire as the prelude to a massive enemy night attack. The NVA kept pressing the attack until approximately 2145 hours at which time the companies reported only occasional mortar, small arms, grenades and B40 (rocket-propelled grenade launcher) fire.  The NVA had attacked in three separate waves and were at times able to advance within 5-10 meters of the company defensive position.  It was estimated that a total of 175 mortars and 45 rockets had been received as of 2400 hours in addition to the small arms fire and three ground attacks.

Eugene was outside of the perimeter defense when the NVA set off trip flares in front of his LP team position (listening post, usually 3-4 men outside the perimeter which acted as early warning system).

The four-man team immediately opened up on the NVA clearly visible by the illumination of the flares in the jungle.   Certain the trip flares and ensuing fire had compromised their position, the LP team scampered back towards the B Company line.  Poeling stayed behind to cover the withdrawal.  The team reached B Company line, followed by Poeling and they all huddled behind a large log some twenty meters inside the perimeter.  Soon afterwards, a mortar round exploded near Poeling.  He was struck by fragments from the hostile mortar round at 2200 hours on 20-MAY 1967 and died instantly.  He was in Vietnam just 40 days.

Members of the four-man LP team:

Eugene is honored on the Vietnam Veteran’s Memorial in Washington DC.  His name is inscribed at VVM Wall, Panel 20e, Line 66.  Eugene is buried at St. Francis Church Cemetery in Portage des Sioux, MO.  Eugene was posthumously awarded a Bronze Star for Valor for singlehandedly covering the withdrawal of his LP team. He was also awarded the Purple Heart.