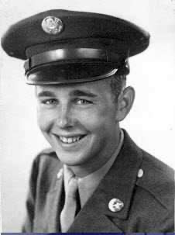 Finck, Roy W.A. was born 9 Feb 1924 In St Charles. His father was Emil P. Finck (1894-1980) and his mother was Clara Maria Elsie Koetter Finck (1896-1981). Roy had one brother; Walter and two sisters; Doris and Kathleen. Roy attended St. Charles High School. He was treasurer of the HI-Y Club, according to the yearbook. His draft card indicates that he worked for the University of Missouri in Columbia MO. Finck married Betty Jane Renne Finck, from St. Louis, in 1948. They lived at 2101

Randolph Street in St. Charles MO. Roy had a degree in mechanical engineering.

Finck enlisted in the Air Force in 1949 and served during the Korean War. He had the rank of Second Lieutenant. His service number was 1911560 and he served with 11th Troop Carrier Squadron, 60th Troop Carrier Wing at Rhine Main, Germany. 2nd Lieutenant Roy Finck was also a veteran of World War II.

During the Korean War, he was the co-pilot of a C-82 transport with the 11th Troop Carrier Squadron, 60th Troop Carrier Wing at Rhine Main, Germany. On 13-NOV 1951, the aircraft was enroute from Rhine Main to Bordeaux, France when it crashed on Mt. Dore, near Bordeaux, about 250 miles south of Paris killing all 36 on board. The weather at the time according to newspaper reports was foggy with limited visibility. Roy along with 35 others died in the crash on 13-NOV-1951. He left behind, his wife Betty and their 10 month old son, Wayne. They were living in Frankfurt Germany when the accident happened. Betty telephoned informing Roy’s parents of the accident. Roy’s body and his family returned to St. Charles on 2-DEC 1951. Roy Finck is buried in Immanuel Lutheran Cemetery in St Charles.