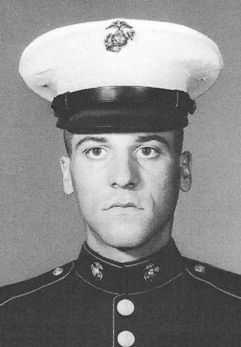 Floyd Wayne Hartwick Jr was born on 28-DEC 1946 in St. Charles MO. They lived in New Melle. His father was Floyd W. Hartwick Sr. (1924- 2001) and his mother was Mrs. Drucilla Smith Hartwick (1923-1965). Floyd Sr. was a US Navy veteran. Floyd Wayne Hartwick graduated from Francis Howell High School in Weldon Springs MO in 1966. Floyd had two brothers; Danny Ray and Butch Campbell and three sisters; Cynthia, Barbara and Priscilla. He was serving in Vietnam with Gerald Vesel, an uncle who was more like a brother to Floyd Jr. Gerald was raised by the Hartwick family. Floyd worked at General Motors and began a leave of absence on 22-APR 1966 to join the Marines.

Floyd enlisted in the Marine Corps on the “buddy plan” and served during the Vietnam War. Gerald Vesel was one of the four buddies. Floyd was promoted the rank of Lance Corporal on 27-FEB 1967. His occupation specialty was Rifleman. Floyd served with 1st Marine Division, 7th Marines, 2nd Battalion, G Company or “Golf 2/7.”

On 15-JUL 1967, with just four weeks to go on his tour, he drew point on a patrol. Floyd was “short” and engaged to be married and would be discharged in August. While on the patrol they tripped a booby trap. LCpl Floyd Wayne Hartwick was killed in action 15-JUL 1967 in South Vietnam, Quang Nam province.

For more information about Floyd, click on this file.