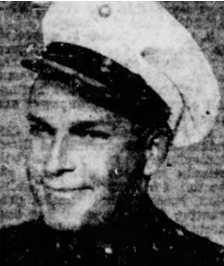 Francis Edmund Rose was born on 22-JUN 1919 in St. Charles Missouri.  His father was Frank E. and his mother was Mamie Rose Davey.  His parents lived on North Walton Ave.  Francis had five brothers; Weldon, Thomas, Elton, Raymond and Robert.  He had one sister, Mabel.

Francis and his wife Norma M. Rose lived at 5585 Easton Ave.  Later, the 1940 census listed a son Kenneth (4 months old) and their address as 3051 Wise in Normandy.  His occupation is listed as a gas station attendant.  Francis registered for the draft on 16-OCT 1940.  He was employed by the Leis Company at 8404 St. Charles Rock Road.

Francis enlisted in the Marine Corps serving during World War II. He had the rank of Private First Class. Francis Edmund Rose served with the Marine detachment on the USS Indianapolis, a heavy cruiser (CA-35).

The USS Indianapolis was sunk on 30-JUL 1945.  The sinking was a tragic moment following the completion of a secret mission that directly contributed to the end of World War II.  After a successful high-speed run, with no escort ships for protection to deliver atomic bomb components to Tinian, the decorated Portland-class cruiser continued to Guam.

Indianapolis was en-route from Guam to Leyte when she was torpedoed and sunk by the Japanese submarine I-58.  At 14 minutes past midnight, on 30-JUL 1945, midway between Guam and Leyte Gulf, she was hit by two torpedoes out of six fired by I-58.  The first blew away the bow, the second struck near midship on the starboard side adjacent to a fuel tank and a powder magazine. The resulting explosion split the ship to the keel, knocking out all electric power. Within minutes she went down rapidly by the bow, rolling to starboard.

Of the 1,195 onboard, about 900 made it into the water in the twelve minutes before she sank. Few life rafts were released. Most survivors wore the standard kapok life jacket.  Although the Indianapolis had sent several SOS signals before it sank, somehow the messages were not taken seriously by the Navy. Nor was much notice taken when the ship failed to arrive on time.

No one was coming to the rescue.

When the survivors made it into the water, they discovered another underwater predator.  Drawn by the carnage of the sinking, hundreds of sharks from miles around headed towards the survivors.  Shark attacks began with sunrise of the first day and continued until the men were physically removed from the water, almost five days later.

“The first sharks were spotted the morning after daylight.  They were big and they were continually there mostly feeding off the dead bodies. But soon they came for the living, too.  We were losing three or four guys each night and day;  You were constantly in fear because you’d see ’em all the time.  Every few minutes you’d see their fins – a dozen to two dozen fins in the water.

They would come up and bump you. I was bumped a few times – you never know when they are going to attack you.

Some of the men would pound the water, kick and yell when the sharks attacked. Most decided that sticking together in a group was their best defense. But with each attack, the clouds of blood in the water, the screaming, the splashing, more sharks would come.

In that clear water you could see the sharks circling. Every now and then, like lightning, one would come straight up and take a sailor and take him straight down. One came up and took the sailor next to me.  It was just somebody screaming, yelling or getting bit.  You could barely keep your face out of the water. The life preserver made blisters on my shoulders, blisters on top of blisters. It was so hot we would pray for dark, and when it got dark, we would pray for daylight, because it would get so cold, our teeth would chatter.

The sharks, though, were not the main killer. Under the scorching sun, day after day, without any food or water for days, men were dying from exposure or dehydration. Their life jackets waterlogged, many became exhausted and drowned.

Finally after five nights and four days, a pilot of a search plane saw them.  Navy ships raced to the site and began looking for the groups of sailors dotted around the ocean. Of a crew of 1195, just 317 sailors survived.

There were 39 Marines in the detachment aboard the USS Indianapolis when she went down. Of the 39 Marines aboard, only 9 survived. It is unclear whether Rose died in the explosions or in the water.  Rose was reported missing and ultimately declared dead on 30-JUL 1945 the day the ship was sunk. Official recorded circumstances attributed to: “Missing in action or lost at sea” in the waters off Guam, Philippine Sea.

The story of the Indianapolis didn’t end there. Rather than blame the sailors and officers back in the Philippines for missed communications, numerous blunders and incompetence, the Navy decided to court-martial the ship’s Captain Charles B. McVay.  Despite the support of his crew and even the favorable testimony of the Japanese submarine captain who was flown to Washington for the trial, McVay was found to be at fault.  Out of the 700 US ships sunk during WWII, McVay was the only Captain to be court-martialed.  He received hate mail from the families of dead crew members for years and finally committed suicide in 1968.

Following years of efforts by some survivors and others to clear his name, McVay was posthumously exonerated of wrongdoing by the 106th United States Congress and President Bill Clinton on October 30, 2000.

There were seven other St. Louis area sailors onboard the USS Indianapolis when it was sunk:

Shortly before the ship sailed Francis and his brother Earl were together on Gaum for a few hours according to a letter recd by his mother Maime Rose.

Francis Edmund Rose is memorialized at Tablets of the Missing at Manila American Cemetery, Manila, Philippines. This is an American Battle Monuments Commission location.